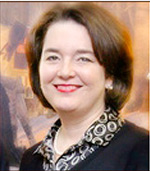 At present, Brooks, who was admitted to the Bar Association in 2000, practices with Jones & Jones Attorneys in Andalusia. She graduated from Troy State University and Jones School of Law. Brooks is an assistant district attorney, and serves as the Drug Court prosecutor. She also is the municipal court judge in both River Falls and Gantt. She also is the county attorney.

“It’s going to be a change, but I look forward to it,” she said. “I am excited about that. I don’t foresee any big changes because the office runs wells. More intention is to get in there, get more familiar with the operation, andsee what I can do.”

Brooks said she previously filled in for Bowden when he was on military duty, and is familiar with many aspects of probate court.

“I like dealing with the elderly people, conservatorships, estates, and mental commitments,” she said. “That is a position in which you can help the people who need the help the most.”

She and her husband, Corey Brooks, have two children, Conner and Caroline. She is the daughter of Jerry and Anita Bryan of Opp.

A swearing-in ceremony has tentatively been planned for Monday afternoon.

The Andalusia City Council reappointed Jewel Curry and Larry Avery to the its Tourism and Relocation Committee. The council also... read more