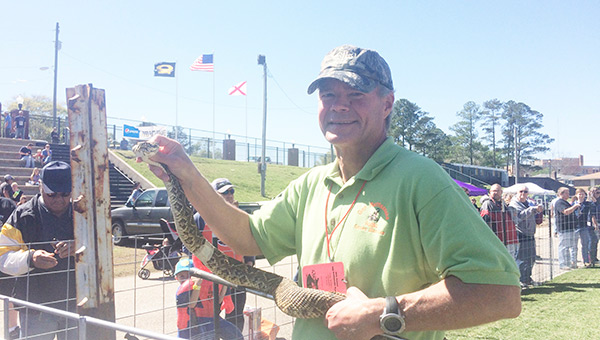 One of those behind the page is local biologist Mark Bailey, who has long been a proponent of the rodeo becoming more “educational and wildlife-friendly.”

“The group started a few weeks ago, has almost 400 likes, and has reached over 600 people,” he said. “I am the admin but there are others involved.”

Bailey said it’s an online protest as well as clearinghouse where information about the negative aspects of the wild snake roundup can be accessed.

“Several of us were banned from the Opp Facebook page for simply asking the wrong questions or making suggestions,” Bailey said. “We do not oppose the Opp Rattlesnake Rodeo as an event, and we are not opposed to the killing of a rattlesnake that is a real threat to people or pets.

“I know that some people cannot fathom that others actually care about rattlesnakes the same as we do gopher tortoises, but we do exist, and the Opp Rodeo’s snake hunt and exploitation is an anathema to us,” Bailey said. “We are simply opposed to the removal of eastern diamondback rattlesnakes from natural ecosystems where they play an important role.”

Bailey said the stigma of the species being venomous has kept them from being listed as endangered.

“We are concerned about the conservation message it sends our children,” he said. “Several other roundups in Georgia and Florida have made the transition from roundup to snake festival, and I have no doubt Opp will eventually do the same.”

Dr. David Steen, who is a well-known snake expert who frequents Covington County, is also involved in the movement.

Steen said there is a very simple and easy way for the Opp rodeo to change and that is for them to stop encouraging people to collect wild rattlesnakes and to end the practice of using wild-caught animals in their events.

More than 80 have been captured for the past two rodeos each year.

“Collecting wild snakes is not only bad for the animals but it is a risky behavior for the collectors,” Steen said. “In any case, many former rattlesnake roundups have changed their ways and now exhibit captive snakes instead of wild-caught animals. That’s it. All the other rodeo events need not be modified at all. Under this scenario, plenty of people will still come to Opp. Are there really any people who would stop coming to the rodeo because it features captive snakes instead of wild ones?”

Melissa Amarello, who has worked to help reform roundups out west, is also involved in the group.

“In nearby Claxton, Ga., they switched their roundup to no-kill years ago and have actually had higher attendance and brought in more money,” Amarello said. “It serves as a great example for other roundups. Instead of negatively impacting native wildlife and habitat, they are promoting conservation through positive messaging and environmental educations. And the same conservation groups that formerly criticized and protested the event now promote and even take part in it. It’s pretty rare in conservation that there’s a solution that’s truly win-win for everyone involved, but switching kill roundups to educational festivals is the real deal.

Each year for the rodeo, a handful of people hunt, trap and transport eastern diamondback rattlers that were caught in a five-county area surrounding Opp.

Instead of sending the rattlesnakes to universities for research, they now give them to companies who milk them for venom and makes vaccinations, according to rodeo officials.

The Facebook group has sparked outrage and outbursts from the Opp community. The event is the biggest of the year for the small town.

Many locals have threatened to send the group’s members their rattlers to put in their yards.

Rodeo coordinator Don Childre told the group that “no snakes are killed at the Opp rodeo.”

The group claims that while Childre’s are technically true, that “the snakes end up dead in short order and end up as belts, hatbands, etc.”

The group is hoping for dialogue, but Childre, said, “no reason for dialogue. Everyone is entitled to their opinion but not try to force it on others.”

“There is every reason for a dialogue,” the group posted. “The rodeo folks just refuse to participate. Rather than defending their actions, they call people snake freaks and tell them it’s none of their business. Like George Wallace talked about outside agitators. There are plenty of people in and from Opp and Andalusia who view the rodeo as an embarrassment, but only because of the way the animals are dealt with, and the anti-conservation message it sends.”

Childre has for years disagreed with organizations who claim that there are declining number of rattlesnakes.

“Some of the data (these organizations) have pertain to the Rattlesnake Rodeo,” Childre said. “It says that we had close to 400 snakes in the 1970s, and then said we only had 25 the first year the city had the rodeo. That’s because I told the (former) mayor that I didn’t want to deal with 300 to 400 rattlesnakes. We could get 300 if we wanted them.”

Is Wages right? Sales tax down in River Falls

Overall tax collections in River Falls are down 10 percent for the first three months of the calendar year, while... read more