Northrop, Orme say ‘I do’ 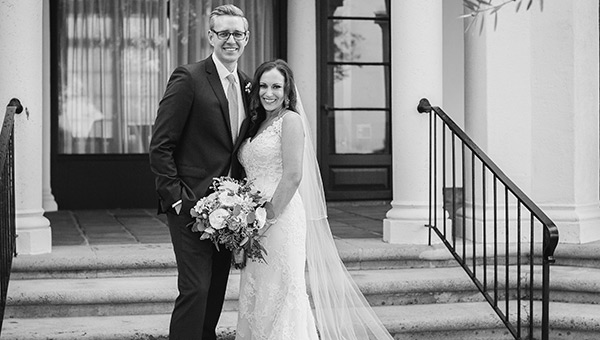 A celebration of Christian marriage uniting Laura Northrop and William Orme was held on Sat., Feb. 13, 2016, at four o’clock in the afternoon at The Neighborhood Church in Palos Verdes Estates, Calif.

The music for the ceremony included “Bach Cello Suite Number One” during the seating of the parents and grandparents. “Be Thou My Vision” was played during the procession of the wedding party. “Before the Throne of God Above” was played as the bride, escorted by her uncle, entered the sanctuary. “How Deep the Father’s Love for Us” followed the exchange of wedding vows and rings. The recessional song, “Praise to the Lord the Almighty,” was followed by the postlude, “In Christ Alone.”

Following the wedding ceremony, a dinner was held at the Portofino Hotel and Marina Bayside Ballroom in Redondo Beach, Calif.

The couple is presently residing in Long Beach, Calif.

They will be moving to Houston in July where William Orme will complete his pre-doctoral psychology internship at the Menninger Clinic of the Baylor College of Medicine.

She has a bachelor of arts in human development from Samford University in Birmingham.

She has a masters of arts in marriage and family therapy from Reformed Theological Seminary in Jackson, Miss.

In addition, she has a master of arts and doctorate in clinical psychology from Rosemead School of Psychology from Biola University in La Mirada, Calif.

William Orme is a doctorial candidate in clinical psychology at Rosemead School of Psychology in La Mirada, Calif.

He also works part-time as an engineer with Northrop Grumman Aerospace Systems.

He has a bachelor of science in Aerospace Engineering from California Polytechnic State University in San Luis Obispo, Calif.

Pat Northrop, family and friends invite you to join them at a reception celebrating the marriage of Laura and William Orme on Sat., April 9, from 4 p.m. to 6 p.m. at the First Baptist Church Fellowship Center, 110 East Hart Avenue, Opp.

Weaver, Tillman to wed in April

Mr. Preston L. Weaver of Andalusia and Mrs. Kimberly A. Collins of Marianna, Fla., are happy to announce the engagement... read more