Kyle Adams was elected to the District 4 seat on the Covington County Commission in Tuesday’s GOP primary runoff. 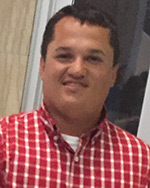 Only 11.2 percent of the registered voters in Covington County participated in Tuesday’s election, which featured only two races. The second race was for a set on the state board of education. Jackie Zeigler outpolled incumbent Matthew Brown in local voting.

Adams and Tony Holmes, who was elected in March, will replace Harold Elmore and Carl Turman on the commission, which also will have a new chairman in Greg White when they take office in November.

“I’m very excited,” Adams said in the courthouse Tuesday night. “Turnout was low, but I’m pleased with the number of our supporters who participated. District 4 voters turned out.”

All members of the commission currently run countywide.

Adams said he believes voters wanted someone they could talk to.

“I think they want commissioners to be held accountable, not to just say, ‘I’ll call the engineer,’ ” Adams said.

He said his commitment to youth recreation also resonated with voters.

Adams is a resident of the Loango community,, and is a 2004 graduate of Red Level High School. He is a River Falls police officer and a staff sergeant in the Alabama Army National Guard.