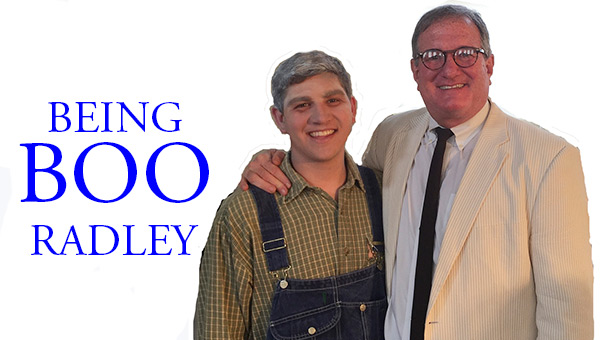 When the curtain goes up on Mockingbird Players’ annual production of To Kill a Mockingbird in Monroeville tonight, Charlie Brock will take the stage in his third role as a cast member.

And it’s his easiest one yet, he said.

Brock, an AHS senior, has been a part of the group since sixth grade, when he was an understudy for Dill. He then was cast as Dill for two years, followed by two years as Jem Finch.

Last year, he worked lights and sound, and this year his role is one of the story’s main but mostly silent, characters, Boo Radley.

He also is the voice of Nathan.

“All of my roles are part-time, so I move around,” he said of this year’s production.

In advance of tonight’s official opening of the season, the cast has done four young audience performances.

As fans of the play, movie, or Pulitzer Prize-winning novel know, Boo Radley is a recluse, and much older than Brock. To look the part, he uses silver hairspray and white hairspray, and wears the whitest, palest shade of foundation he can find.

After his years associated with the production, he knows every line.

“I found myself saying them with the characters while I was working the lights,” he said.

“The most difficult was Dill because it was my first time in the play,” Brock said. “The most fun was Jem.

“This one is interesting, because Boo has only one line, which is, ‘Scout, will you take me home.’ This is probably the easiest. But I have to say Jem’s my favorite. I love doing it all.”

His dad, Jeff Brock of Evergreen, is again doing the role of Atticus Finch.

The younger Brock said he feels very invested in the play, and the Mockingbird Players “are like a big family you join.”

The play is an annual event in Monroeville, and a tourist attraction. It begins with the audience seated before a set on the courthouse lawn, and moves to the courtroom of the historic building at intermission.

For many years, the play was a production of the Monroe County Museum. This year, it has been taken over by the Mockingbird Company.

“It’s a big transition, but it’s going well,” Brock said. “Most of us have worked together for so long, we know exactly what to do. “

Participating requires a huge time commitment, including the commute to Monroeville. The players begin rehearsing in February. The performance begins in April and runs until the end of May.

Earlier this week, he participated in young audience performances.

“I was fortunate to be excused (from class) by Dr. Shakespeare, and for some of the performances we’ve done, I’ve gotten community service hours.”

Despite his years of involvement, until this year, Brock said he’d never seen the play in its entirety. The ending scene – after young Scout escorts the reclusive Boo back home – in which Scout says to Atticus, “You always say you never know a person until you have walked in his shoes. All I had to do was stand on his front porch,” was new to him.

“It blew me away,” he said. “I understood the play 100 percent better, and it’s my favorite part now.”

Tickets to the performances are available at eventbrite.com, and are $50 each. Keeping the tradition of the era, any white male over the age of 18 can be called for “jury duty” as part of the play. If selected, he will be asked to sit with the jury during the courtroom scene.

Despite his long involvement in the stage, Brock’s career goal is to become a commercial pilot, and he has been accepted into Embrey-Riddle Aeronautical University in Daytona Beach, Fla.

He already has a private pilot’s license.

“It was the most-nerve-wracking thing I’ve ever done,” he said. “I will forever remember everything about that day.”

He also is very involved in school. He’s earned almost 500 community service hours, and is a member of Key Club, SGA, Usher Club, and many other student organizations.

He also is the son of Nancy Dove of Andalusia.

Residents from across Covington County gathered on the Court Square in Andalusia on Wednesday morning to help raise awareness of... read more