The Saints plated two runs in the opening frame and three runs in the third inning to take a 5-0 lead. 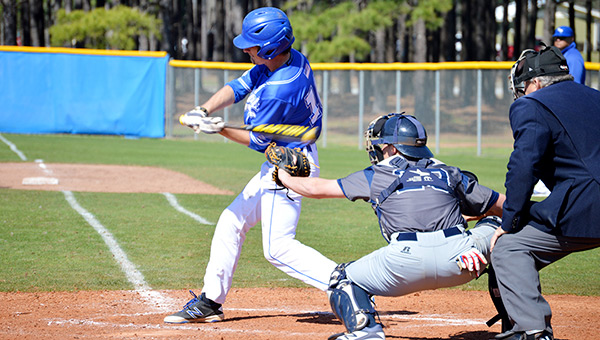 Michael Mims gets a rip in a recent game.
Josh Dutton/Star-News

Bishop State’s only runs of the game came in a three-run fourth inning, but the Saints still held a 5-3 lead.

LBWCC added two runs in the fifth inning and five runs in the bottom of the sixth to give them a 12-3 victory.

Mason Rogers went 4-for-4 with two RBI and four runs scored. Rogers also homered and doubled in the Saints’ win.

Taylor Fought went 4-for-4 with one RBI and one run scored.

Trey McMillian finished the game 3-for-3 with two RBI and three runs scored.

Matthew Jones was 1-for-3 with two RBI and one run scored.

Gunner Hendrix finished the game 1-for-4 with a home run.

Orlando Lacey avoids a W.S. Neal runner as he attempts to turn a double play for the Bobcats. The Class... read more