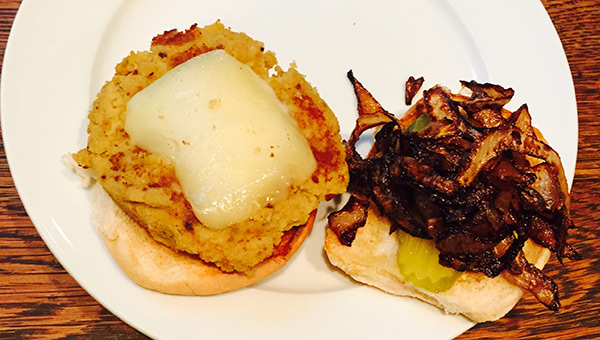 While in Wilmington the other week we had two extra days waiting to go to a funeral in Greenville, S.C.

We had been wanting to go the Chef and the Farmer restaurant in Kinston, North Carolina for a long time but never could get a reservation. Vivian Howard is the chef and star of the PBS series by the same name as the restaurant and she does have a following.

We settled for going to her no reservations restaurant right next door called The Boiler Room Oyster Bar. It was also packed by 1PM on a Saturday but there was one table in the corner so we were set.

We of course started off with the raw oysters and her sauce was delicious. We then tried the baked oysters with collards and tomatoes, but when only 5 arrived and not the 6 we ordered the waiter explained that he would be back with the other one in a minute. Found out he had dropped the one on the floor but did not want to keep us waiting so I got the last one and it was piping hot which the other were not, but good anyway.

My husband had read about her butterbean burger and heard it was really good so we got two of those and included fries with poutine (pork) and cheese—and some charred broccoli so we could say we were eating healthy! We were stuffed but it was really all so good.

I just had to do those butterbean burgers and I found Vivian’s recipe on line and tried them the other evening and they were delicious. So if you are looking for a new burger recipe, do this one. I fried some onions to top the burger (as they did in the restaurant) and you can add any cheese but Vivian uses Gouda and any other things you like on your burger.

Also watch her show which features North Carolina products. She is also up for a James Beard Award for her show. The show is down to earth and just tells about her trials in running a restaurant in eastern North Carolina, but she has made a success of her show and restaurant since she is always booked, but I just may find a way to get back and eat at the real thing

Cover the butter beans, bay leaf, and black pepper with cool water in a 4 quart pot. Bring the butter beans up to a simmer and skim off any scum that rises to the top. Cook the beans until they are completely tender and add 2 teaspoons of salt to the pot. Let the beans sit for about ten minutes in the seasoned water, then drain.

Meanwhile, in a medium sauté pan, cook the onions in the olive oil for about 30 minutes, or until they are slightly caramelized. You’re looking for a honey color on these. In a large bowl, toss the beans together with everything but the bread crumbs. Transfer this mixture to the bowl of a food processor and blend until it is mostly broken down. You should be looking at a mixture that is about 70 percent paste and 30 percent recognizable pieces.

Transfer the contents of the food processor back to the bowl and stir in the bread crumbs. Let the burger mix rests for 30 minutes. This will allow the bread crumbs to become acquainted with the bean paste, providing a sturdier burger.

Divide the bean mix into 12, roughly 5 oz. portions and patty them out to ½ inch thickness. When you are ready to cook your burger, heat a little oil in a sauté pan until nearly smoking. Add the burger and let it brown on one side for about 3 minutes. Once it is nice and caramelized, even crispy, on that side flip the burger and brown on the opposite side.

You can serve this on a bun with all the fixings, or just serve it alongside a salad with a bright vinaigrette.

The origin of citrus is uncertain. China is the most likely origin of the lemon. The Arabs had certainly introduced... read more