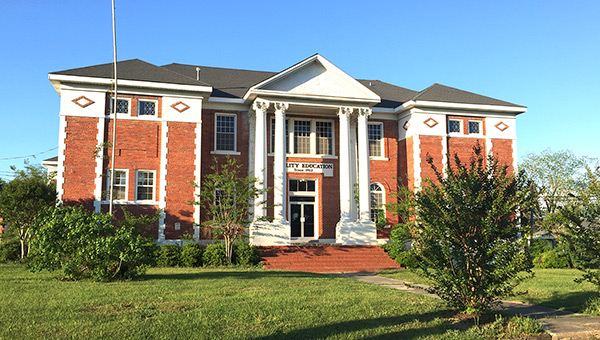 This building, once Florala City School and most recently known as Florala Middle School, was built in 1912. Up for debate is whether or not the city should sell the oldest part of it to someone willing to restore.

Split council would have to agree on proposal

Earlier this year, the City of Florala advertised for proposals for the purchase and upgrades of two properties – the administration building of the school, located at 22975 7th Ave., and the Percy McClung National Guard Armory, located at 1308 5th Street.

A proposal from Sharlyn Thomas, owner of The One-Eared Rabbit, had proposed buying the building for $20,000 with an eye toward developing an auction house and bed and breakfast.

However, Thomas backed away because she thought the gymnasium was included, and decided the restoration was cost-prohibitive without it.

A proposal from Jeanne-Marie Carlson for the armory, also was approved.

On Monday, Councilwoman Ann Eason made a motion to rescind the sale of the school and take a sale off the table.

“Since the lady didn’t accept her own bid; I move that we rescind the sale of the main building at the city school,” she said. “Or selling it period. I don’t think anybody who is here wants us to sell it. I’ve talked with several classes who say they’ll take up money at ever one of their meetings and they’ll gladly help pay for the upkeep.

“I’ve heard even our industrial board might want to purchase the building to develop it,” she said. “My motion is to not have any sale.”

Mayor Robert Williamson said, “I’m totally opposed to not selling, and here’s the logic. Tonight’s meeting is extremely, extremely unusual. Every single one of us here don’t want the building destroyed. No one wants the building torn down, of for it to deteriorate.

“The question is how you save the building, and keep it from deteriorating? How do you overcome the cost involved to make this building that we do want to get back to its 1912 grandeur? The city doesn’t have funds.”

Williamson said an estimate on the cost of restoring the building for city hall was estimated at $250,000.

“The lady who placed the proposal on the building at $20,000, the reason she withdrew her proposal was she stopped counting at $300,000 when she estimated the cost to improve. And that was before furnishings. She said ‘at least $300,000.’ ”

Williamson said moving city hall is not feasible, even if it was logical.

“Even if it was logical, we don’t have a quarter of a million to renovate it,” Williamson said. “That leaves us searching for someone with the wherewithal.”

Williamson said Carlson originally proposed to take the armory, but would prefer the school.

“I don’t see how we can bypass somebody who’s got the resources,” he said. “The building is proud and significant. It is a masterpiece that deserves the utmost in attention. We do not have the financial resources. But they do and I think we should give them the opportunity.”

Councilwoman Deborah Inabinett said she has gotten lots of calls about the school.

“I had made my decision, but after last call, I got another slap on the hand,” she said. “I feel like maybe since the middle school didn’t sell, maybe it’s omen to see what’s going on. I think maybe we should keep it.”

“And that’s only a band-ad, what we’re doing right now,” she said. “ If somebody can do something with it, and restore it, that’s what we need to do.”

Eason, Williford and Inabinett voted in favor of the motion to rescind the sale; Lee, Carmichal and Williamson voted against the motion, which then died.

Carlson told the council that she fell in love with the town when the construction company she and her husband own did the restoration work on the Hughes mansion.

“I appreciate the council accepting the proposal on the armory building,” she said. “One way or the other, I’m still coming here, to the middle school building or the armory.

Jeanne-Marie Carlson previously submitted a proposal for the armory, but would prefer to do work at the school.

“I understand everyone’s concern,” she said, adding that she would prefer to enter a partnership with the city on the school and give it a heartbeat again.

“I do hope that y’all will consider allowing me to switch my proposal from there to the middle school,” she said.

Mrs. Carlson said she works with a youth group in Ponce de Leon and would like to do a similar outreach in Florala.

The building was closed as a county school in 2010.