Spring is here: That means asparagus

Spring means asparagus to me.

Asparagus is native to the Mediterranean. Imported by the early colonists, asparagus growing in beds is described in records from Virginia as early as 1737. 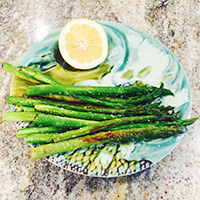 Sometimes asparagus escaped the kitchen garden and ran wild along sandy riverbanks and seashores. In some rural areas, the word was corrupted into “sparrow grass,” “spare grass,” or “sparrow guts.”

Almost all eighteenth-century cookbooks advised serving asparagus with toast, butter, and lemon, a combination that remains popular now. Thomas Jefferson recorded harvesting asparagus multiple times at Monticello. He described eating it battered and deep-fried and also in “the French way,” presumably in vinaigrette. How to cook asparagus is often discussed more passionately than how to grow it. Even the earliest cookbooks promoted the idea of gently cooking asparagus. As one book put it, “by over boiling they will lose their heads.”

Some cooks figure that thin spears are younger and more tender than thick spears, but that’s not necessarily true. Some varieties of asparagus are always thin and some are always thick. The key to succulence and good flavor is freshness. Asparagus should be cooked as soon as possible after it is cut, while the heads remain tightly closed and the ends are moist.

The difference between green and white asparagus is in how it is raised. White asparagus grows covered by earth or thick tarps that block sunlight so that green chlorophyll cannot form in the plant. The white spears must be peeled, but their interiors and subtle flavor make the time and effort worthwhile.

Here are some ways to prepare asparagus which helps preserve the flavor. Grilling is perhaps the most favored way to serve asparagus these days, but if you do not like to fire up the grill try these.

This is the easiest way to cook asparagus. It is fast and the dry searing heat preserves the flavor and nutrients. This is good served with a Roasted Garlic Mayonnaise or a Romesco Sauce.

Snap off and discard the tough ends of the asparagus. Arrange the spears in a single layer on a rimmed baking sheet. Drizzle with oil and roll the spears back and forth to coat. Sprinkle with salt and pepper.

Roast until crisp-tender and browned in spots, about 5 minutes, depending on the thickness pf the spears. Serve hot or at room temperature.

I am not a fan of cooking asparagus in water because it makes the asparagus spongy and dilutes the flavor. In this recipe the flavor is concentrated as it cooks slowly in a skillet.

Coarse or kosher salt, to taste

Snap off a discard the tough ends of the asparagus. Cut the spears into bite size lengths.

Heat the oil in a large, heavy skillet (preferably cast-iron) over medium heat. Add the asparagus and stir to coat. Cook, stirring often, until the asparagus is quite tender and browned in spots, 15 to 25 minutes. Sprinkle with salt and serve warm or at room temperature.

From The New Southern Garden Cookbook by Sheri Castle.

This recipe is for people who are strapped for time like most of us. But you can use some packaged ravioli or frozen but add the fresh asparagus for a nice meal.

Snap off and discard the tough ends of the asparagus, cut the spears into bite-sized lengths.

Cook the ravioli according to package directions. When the ravioli are 5 minutes short of the recommended cooking time, add the asparagus to the pot and continue cooking until both are done. Drain.

Melt the butter in a large skillet over medium –low heat. When the butter is no longer foamy, add the walnuts and cook, gently swirling the pan, until the butter is golden brown and smells like toast, about 3 minutes. Add the garlic and cook for 30 seconds.

Stir in the asparagus and ravioli and heat through. Season with salt and pepper and serve hot, sprinkled with the cheese.

While in Wilmington the other week we had two extra days waiting to go to a funeral in Greenville, S.C.... read more