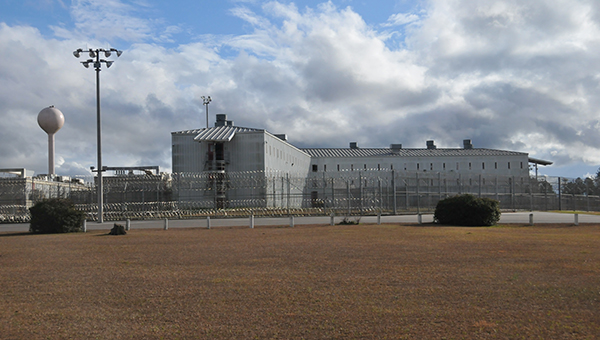 Holman Prison, located north of Atmore, is one of the state’s maximum security prisons and houses death row. It was opened 47 years ago, and cost $5 million. | Courtesy photo

The Alabama Legislature adjourned at midnight without passing a prison construction bill that would close at least some of the state’s aging prisons and replace them with fewer, larger structures.

In its original form, the $800 million prison construction bill would have closed all but two existing prisons and built three new prisons for men and one for women. Prison officials would not say which facilities would remain open.

When the state House of Representatives approved the bill a week ago, it added an amendment requiring additional approval of a final construction plan.

Members of the House and Senate met in conference committee early Wednesday to iron out the differences in the two versions. Later in the day, the same committee was back to the drawing board. In its final version, the bill would have allowed 10 of the state’s 15 prison facilities to remain open, and trimmed new construction to $550 million.

The Alabama Senate approved that bill late Wednesday night, but time ran out on the 2016 session without a second vote in the House.

The Department of Corrections currently houses more than 24,000 inmates in facilities that have an architectural design capacity to house 13,318 inmates. With an occupancy rate higher than 180 percent, the prison system recently has had outbreaks of violence, including an incident at Holman Prison near Atmore in which the warden and a guard were stabbed.

In neighboring Escambia County, Holman Prison, the maximum security prison which houses Alabama’s death row, was built in 1969 at a construction price of approximately $5 million. The most recent DOC report shows the facility is authorized for 239 employees, but has 128.

Fountain Correctional Center, the nearby minimum security facility, was built in the 1950s. The most recent DOC report shows the facility is authorized for 329 employees, but has 142.

The Andalusia City County on Tuesday gave the go-ahead for paving portions of 14 roads. At the recommendation of Andalusia... read more