SHS has 2 extremes at Regional 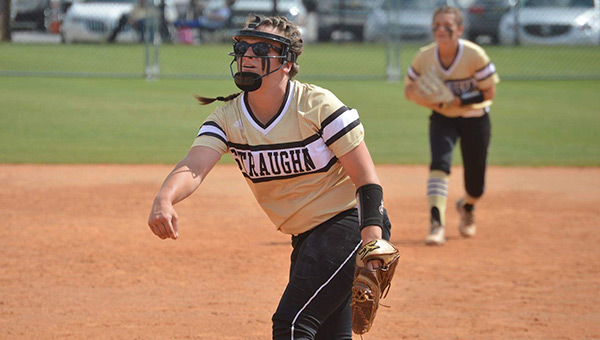 The Straughn Lady Tigers had a roller coaster ride of a day on Friday during the Girls 4A Varsity Softball Regional Tournament. Straughn dominated the Thomasville Lady Tigers 11-1 before being equally dominated by the LAMP Golden Tigers 12-2 in the next round.

Straughn jumped on top of Thomasville with a thrilling eight runs in the first inning as Colby Adams, Brently Armstrong, Kristen Peavey, Caroline Wood, Macy Matthews, Dallas Mackoff, Carolina Fussell, and Molly Stewart all scored during the scoring barrage. The biggest play came when Stewart blasted a massive hit into the right outfield sending three runners home on the hit. The onslaught was so severe in the first that Thomasville was forced to change pitchers before the end of the inning.

Stewart made another highlight player in the second inning, making a leaping catch leading to a double play. Straughn continued to pile on the points with Adams scoring two more runs and Armstrong adding another as well, and Thomasville never managed to get going in the game. Straughn finished off Thomasville 11-1 to advance to the next round in the tournament.

In the second round Straughn likely felt as helpless against the Loveless Academic Magnet Program (LAMP) Golden Tigers as Thomasville did against the Lady Tigers. LAMP scored four runs in the first inning and three more in the second inning to give LAMP a 7-0 lead heading into the third inning.

Straughn didn’t manage to get on the scoreboard until the sixth inning but it was far too late as LAMP finished off Straughn 12-2.

The Lady Tigers will meet Headland in the second round of the loser’s bracket Saturday morning at 9:30 a.m.

The Red Level Lady Tigers made a strong showing in their first trip to the Class 1A South Regional softball... read more