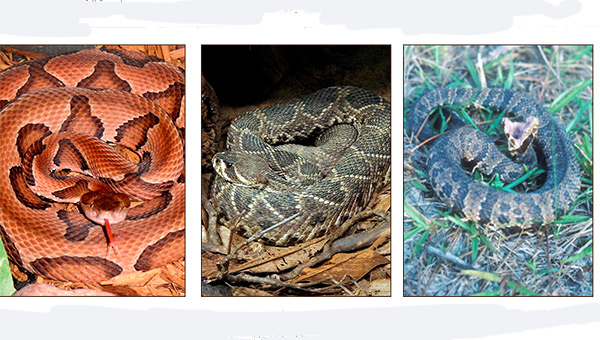 Shown are three types of venomous snakes prevalent in Alabama, including the copperhead, eastern diamondback rattlesnakes and the cottomouth.

The rise in temperatures has locals reporting snake sightings all over social media – including non-venomous and venomous snakes.

Alabama is home to approximately 40 snakes species and the majority can be found locally.

Local biologists Mark Bailey and Jimmy Stiles have both reported seeing what they call the usual amount of snakes for this time of year.

Stiles said he has seen the usual amount of snakes out and about in the last few weeks.

“May is always a spike in observations as the snakes are active during the daytime with the good weather we have been having,” he said.

Copperheads, a venomous pit viper native to the area, are among the most prevalent snakes.

Both Bailey and Stiles have reported in previous years to the Star-News that more copperheads are here now and the rise has an association with the disappearance of the eastern kingsnake.

“More people are bitten by copperheads than other venomous snakes, but deaths from copperheads are almost unheard of,” Bailey said.

The Department of Wildlife and Fisheries offers this advice if you find yourself in a situation where you or someone you are with has been bitten by a venomous snake, take these steps to ensure you survive and make it to a hospital for the appropriate treatment:

· Keep calm. Restrict movement and keep the affected area below heart level to reduce the flow of venom.

· Remove any rings or restricting items from the affected area due to swelling.

· Create a loose splint to help restrict movement of the area.

· Clean the wound but don’t flush with water.

· Wrap wound with compression bandages. Go about 4 inches above the wound, wrapping as you would a sprained ankle.

Below is a list of things you should not do when bitten:

· Do not allow for over exertion.

· Do not apply a tourniquet.

· Do not apply a cold compress to a snake bite.

· Do not cut into the bite with a knife or razor.

· Do not try to suck out the venom by mouth.

· Do not give/take any stimulants or pain medication unless instructed to do so by a doctor.

· Do not raise the site of the bite above heart level.

· Do not drink caffeine or alcohol.

During warm months, avoid areas where snakes inhabit such as overgrown/grassy areas, woodpiles and debris and thick woodlands. If encounters with these areas are unavoidable, be sure to wear the appropriate clothing like long pants, snake boots or snake chaps and gloves.

Vigil in honor of Macer is tonight at 8 Alabama State Troopers are still investigating the cause of an accident... read more