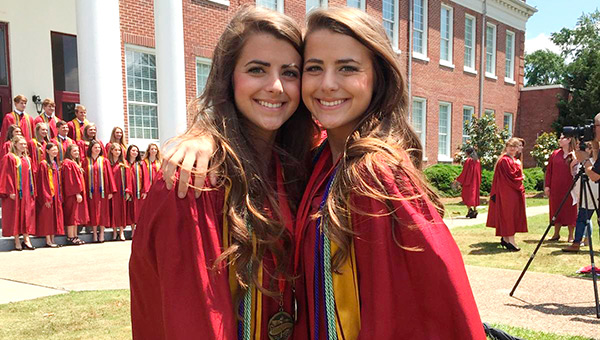 Twin sisters Hannah McCalman, left, and Elizabeth McCalman, right, are the val and sal at AHS.

The race was so close, he offered them an unusual option, he told board of education members this week: They could be co-valedictorians.

Twin sisters Hannah and Elizabeth McCalman laughed at the memory. They had not talked about the possibility before Dr. Shakespeare suggested it.

“We really didn’t know it might be an option,” Elizabeth said.

Hannah added, “We thought we had to be actually tied to share.”

At one point, they were. But with almost the same grade point average in a class that laid claim to $2.1 million in scholarship officers, Hannah was named valedictorian and Elizabeth was named salutatorian. And the race was a competition until the end.

“Now it’s fine,” Hannah said earlier this week. “But before, every day, it was like, ‘Are you gonna look over that?’ ”

Elizabeth said they’ve never studied as hard as they have the last few weeks.

“All of our friends have been really chilling,” Hannah said. “We were like, ‘No. We have to finish.’ It’s like a relief that it’s over.”

Both Hannah and Elizabeth are members of Andalusia Ballet’s senior company. Both are majorettes and City of Andalusia ambassadors. Hannah was vice president of National Honor Society. Elizabeth was president of sub-deb, a social organization. Membership in the Key Club, Peer Helpers, Usher Club and Anchor Club rounded out their lists of activities. They’re also active in the youth group at First Baptist Church.

Elizabeth received the Spirit of Auburn Founder’s scholarship, the Dudley Scholarship, and the Mabel Amos Scholarship.As Covington County’s 2016 DYW, and a finalist in the state competition, she also received approximately $14,000 in scholarships. Each plans a career in medicine. Hannah is considering pharmacy, Elizabeth thinks she’ll probably become an M.D. They’ll get started this summer at LBW Community College.

They agreed that anyone who aspires to become valedictorian has to start working toward the goal as a freshman.

“Once you get behind, it’s hard to get back u,” Hannah said. “But at the top, it’s so easy to come back down.”

Elizabeth advised that you have to study hard. “At some moments, you think it’s not worth it,” she said.

Hannah said that competing with her sister helped her stay focused on the goal.

Elizabeth agreed. “You should find someone and compete with them,” she said. “We compete for everything,” Hannah said.

“It kinda gets tiring,” Elizabeth said, “But it couldn’t have worked out better for us.”