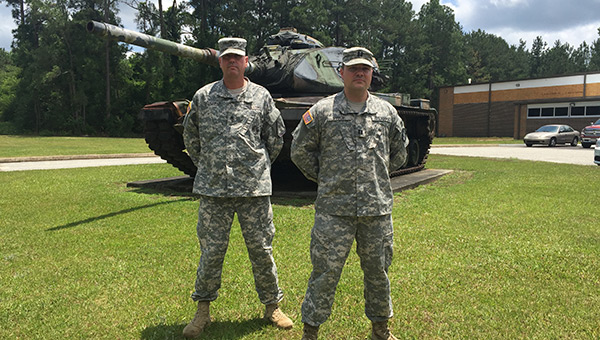 A change in the mission of Florala’s National Guard unit, Troop 131 Calvary, has created the need for approximately 40 additional soldiers.

Capt. Stephen Price, who commands the group, said it is becoming D Co. 1-173 Infantry Regiment, and now has 30 to 40 openings the Guard hopes to fill people from the local community.

“As a calvary unit, we did more surveillance,” he said. “Now, we’ll be more active, with offensive attacks, defensive missions or security missions.”

The current soldiers assigned to the unit had the skill sets needed, but recently completed a two-week course to prepare for the transition.

Sgt. Donald Cuchens, an Alabama Army National Guard recruiter whose task it will be to fill those jobs, said all of the new recruits will be trained in infantry.

“The brigade wants us to go out and recruit, to be more of an old school, hometown Guard unit,” Price said.

Price is encouraging current members of the unit – and especially those who live close by – to recruit new members.

“One of the things I liked about being here is that third or more or our unit drives in from Mobile, Montgomery, Auburn, or Birmingham,” he said. “It kind of gives you a break from your life. I work in an office, so I enjoyed being outdoors and the camaraderie of other guys.”

Price is a Birmingham accountant by day.

“We work hard, and have fun,” he said of his Guard work. “But it’s a nice little break from day-to-day life.”

Cuchens said the benefits offered by the Guard make it the best part-time job in the state.

In addition to a monthly drill paycheck, Guard members qualify for tuition assistance, receive specialized training, and have retirement benefits.

“It’s also a service to the local community, state and the nation,” Cuchens said.

The average soldiers spends 39 days a year with the Guard – one weekend each month, and two weeks training some time around the summer.

At present, there are no openings for females in the Florala unit, but Cuchens said that will come soon.

“The Army has said yes, we can enlist women in combat units,” he said. “But we there have to be female NCOs in a unit, too.

At this moment, we can’t, because we don’t have those in place. In the future, we will.”

Cuchens said recruits will complete the ASVAB, which is the military’s standardized test, and placement is dependent upon scores.

Fitness is also key, as soldiers are required to pass annual tests which include sit ups, push ups, running, and pull ups.

Cuchens said recruits must be at least 17 and a junior in high school.

“Once you join in high school as a junior, you can start receiving recruit sustainment pay,” he said. “You will work one weekend a month, and start out around $200.”

For those without prior military service, the cut-off age for entry is 35.

Begin with the end in mind

The Opp High School Class of 2016 took a trip to Opp Elementary School for a parade of graduates so... read more