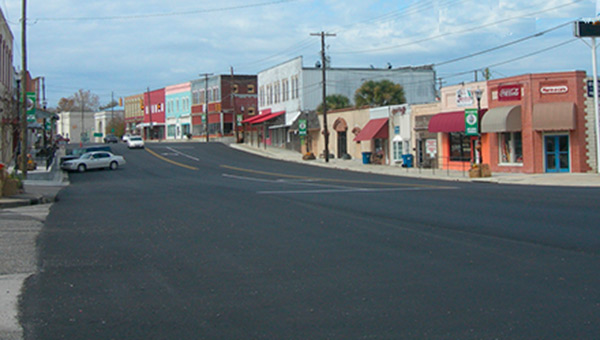 The public will have an opportunity to provide input into the way traffic will flow in downtown Florala during a public hearing is set for 5:30 tonight, Mon., May 23, in Florala City Hall.

Members of the Florala City Council heard from state highway department officials earlier this month on the issue, which arises every year during beach season. Traffic has been bumper-to-bumper in previous summers.

But highway officials think they can make things run more smoothly if the downtown area is striped for four-lane traffic.

To do that, they’ll have to change existing parking from angled to parallel spaces.

Business owners and government leaders have been concerned about the flow of beach traffic since the state Department of Transportation removed traffic lights from the downtown area last fall.

Brent Maddox, who is a Red Oak native and a DOT district manager in the Andalusia office, made the suggestions to the council. Maddox said studies show that when traffic is bottlenecked, people don’t stop because they fear not being able to get back in traffic.

“If traffic is flowing smoother, more people stop,” he said.

At present, there are 95 angled parking spaces in a three-block area. That number would drop to 64 spaces with parallel parking.

“You are losing parking spots, but we can funnel parking into areas near there,” he said.

Report: Alcohol believed to be involved in fatal crash; will go to grand jury

A week after the deadly crash the killed an Andalusia High School freshman, Alabama State Troopers have released the crash... read more