Citizens of Andalusia will have the opportunity to honor the sacrifices of and contribute to the continuing needs of veterans on Sat., May 28, 2016, at Walmart, Winn Dixie and the Veterans Memorial Park when members of the American Legion Auxiliary – Unit 80 will be distributing bright red poppies. The poppy has become a national-known and recognized symbol of sacrifice to honor the men and women who served and died for their country in all wars. 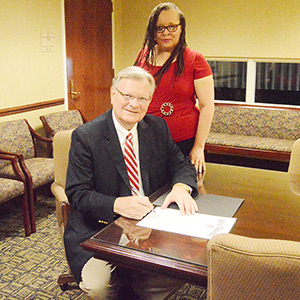 In the battlefields of Belgium during World War I, poppies grew wild amid the ravages of war. The overturned soils of battle enabled the poppy seeds to be covered, allowing them to grow and serve as a reminder of the bloodshed of war.

The poppy is worn in honor of the millions of Americans who have willingly served the nation, all too many of whom have made the ultimate sacrifice. It also honors hospitalized and disabled veterans who make the red, handcrafted crepe paper flowers. The poppy continues to provide a financial and therapeutic benefit to those veterans who construct them.

Founded in 1919, the American Legion Auxiliary is the world’s largest patriotic women’s service organization. With a membership of nearly 850,000, local Auxiliary units have a strong presence in more than 9,500 communities nationwide.

The Auxiliary’s mission to serve veterans, their families and their communities is carried out through its hundreds of outreach programs delivered by its members, volunteers and national headquarters.

The Lower Alabama Arts Coalition (LAAC) has issued A Call to Artists for a juried art exhibition and sale at... read more