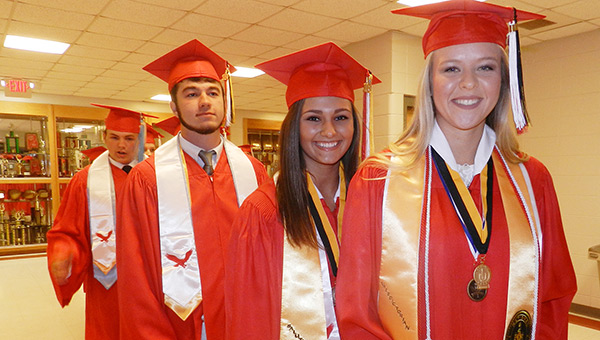 Florala valedictorian Avery McNeill told his fellow classmates that while a chapter of their lives has ended, they have much of their books yet to write.

“This chapter has a bittersweet ending. Now it is time to go off in the real world,” he said, adding that he believes his classmates have real potential.

“Go, live and love,” he said. “Make your books incredible.

“I believe we can make our dreams reality,” he said.

The class, which is 30-members strong, collectively earned more than $288,000 in scholarships.

“Never limit yourself, and don’t be afraid to try something new,” she said. “Set your goals high.”

Valedictorian Cassidy Godwin said many of her classmates have been together since kindergarten.

“We’ve development many friendships in our journey. Some were casual, and others spent every free moment together.”

“As we embark on a new journey, there will always be somewhere else to go,” she said.

“When we cross the stage, we will be considered young adults,” Godwin said.

“Get ready to flip your tassels and toss your caps. We made it.”

“Being at the top of my class doesn’t make me successful,” she said. “What makes me successful is doing my best. It doesn’t matter if you’re first or 30th as long as you’re doing your best.”

Baker told her classmates that their past or current situations don’t define who they are, and encouraged them to never hold themselves back or devalue themselves.

OHS salutatorian Devontae Williams encouraged his classmates to value their relationships with others, keep God first in their lives and to cherish their moments.

Williams gave an emotional speech, in which he thanked God, his family, friends, and teachers, who helped him along the way.