Those who fought and died for America’s freedom were honored yesterday in Opp at a Memorial Day Service held at Peaceful Acres Memorials Garden.

Air Force Col. Ben Bowden, who also serves a circuit judge in the county, was the guest speaker. 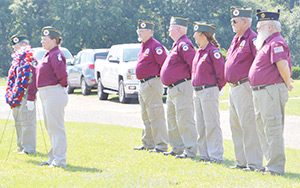 The AmVets honor guard at a Monday morning ceremony

“It is a solemn occasion that we gather to recognize today,” he said. “We are here to honor and recognize those who died in service of our great country. Gen. George S. Patton was one of America’s greatest military leaders. He was greatly respected by his peers, including his enemies. In fact, his reputation as a fierce commander was put to great use to trick the Germans prior to D-Day. He was put in charge of an imaginary Army in England to make the Germans think the invasion was coming somewhere other than Normandy. Gen. Patton was a great leader and left us with some great quotes. He had an interesting twist on dying for your country.”

Patton said, “No (soldier) ever won a war by dying for his country. He won it by making the poor dumb (soldier) die for his.”

Bowden said Patton was right to some extent.

“And I am sure he was trying to make a point,” he said. “But war and military service results in sacrifice and, too often, the death of loved ones. So it is a painful day for many and certainly a day of serious reflection for our nation.”

“You know that a Gold Star mom is one who has lost a child in the service of our country,” he said. “She had this to say about Memorial Day, ‘It is not about barbecue or hotdogs or family get-togethers. It is a solemn holiday to honor those who laid down their life for our nation. I am very proud of my son. He’s my hero.’”

Bowden said he recently learned more about a local hero – Patrick Price, who was the son-in-law of Mr. and Mrs. James Simmons.

Price was a linguist with the Navy and was a crewmember aboard an EA-3B aircraft assigned to the USS Nimitz.

In 1987, his plane went down and the crew lost their lives in the Mediterranean Sea.

“Because of the secrecy of their work, few details are available regarding the mission,” Bowden said. “We only know that the world is a dangerous place, it was a dangerous place in 1987, and it was made safer for me and you by the sacrifice of heroes like Patrick Price.”

Bowden said he had known about Price since 2011 when he visited the Simmons’ home with retired District Judge Trippy McGuire.

“Fast forward to 2015 and the scene is Caroline’s Restaurant here in Opp for breakfast,” Bowden said. “I was there early one morning eating when Mr. Simmons came in. We talked about a number of things and I mentioned that I had recently been assigned to Ft. George Meade in Maryland for my reserve duty. He mentioned to me that a monument had been placed in honor of his son-in-law, Patrick at Ft. Meade. I promised to look for it and really didn’t think about it much.”

“I decided to look for Patrick’s monument and made inquires with the office of the historian, who I thought would have a listing of all monuments and memorials,” he said. “When I go to work at Ft. Meade, I have to park in an overflow parking lot near my office. It is called the airplane parking lot because it has some static displays of airplanes there. I have parked there over a dozen times.”

Bowden said one afternoon as he was leaving work, he decided to check the airplanes around the parking lot.

“I walked 50 feet from my car and found the marker honoring Patrick and his crewmates,” he said. “I took a picture and forwarded it to Trippy to share with the Simmons family. It is so strange, that Mr. Simmons shared with me, just in passing, about Patrick’s memorial. So strange that I was parking 50 feet away. Well as, my mother always says, she doesn’t believe in coincidences, and that these types of things are the Lord’s work in our lives.”

Bowden went on to quote Deuteronomy and Ronald Reagan before sharing an “in case” letter from Sgt. Will Stacey who was killed on his fourth deployment to Afghanistan in 2012.

“The young Marine from Redding, Calf., told his family that he was motivated to fight in Afghanistan to protect the country’s children and provide them the opportunity to go to school and live out their dreams.”

Bowden closed by challenging those present to leave the ceremony with a renewed resolve to never forget the sacrifices made by those men and women who have died to make us free.

“May their lives, and more importantly, deaths, be a constant reminder of the price of freedom.”