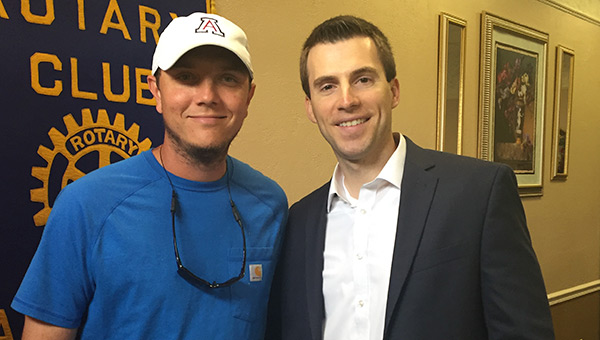 WSFA sports director Stephen Gunter told local Rotarians Tuesday he got his first taste of broadcasting and reporting on sports as a high school student at Andalusia High School.

“Coach Bulger invited me to announce the plays at a JV football game,” he said. “That’s how I got my foot in the door.”

Gunter joked with his contemporaries in the local civic group that he kept the bench warmed for them on the football field.

Gunter went on to earn a broadcast journalism degree with a concentration in sports information from Troy University.

In his first job out of college, in the Panama City market, he learned to cover high school football, but also had the opportunity to cover fishing tournaments and junior college sports.

Then-Florida State head football coach Bobby Bowden was a favorite interview, and always friendly to the media, he said.

“I go to cover his final football game, which was pretty special,” he said. “When he finished the press conference, he got a standing ovation.”

After three years in Panama City, Gunter moved to Jackson, Miss., where he got the opportunity to cover more college sports in a larger market. He moved from there to Montgomery, where he worked with longtime sports director Jeff Shearer, whom he considered a mentor. When Gunter left WSFA to work for Auburn University Athletics, Gunter was promoted to sports director.

Coming to WSFA was like coming home, he said, because he grew up watching sports on the station, and would always rush back home to watch Friday night highlights.

“My first year, I got to watch the greatest ending to the Iron Bowl ever,” he said, referring to Auburn’s win on a missed field goal in the final seconds of a game. He also got to cover Auburn’s national championship game against Florida State, and Alabama’s recent championship win.

“It’s an amazing opportunity,” he said. “I got to attend Larry Blakeney’s final game at Troy, and Bruce Pearl’s arrival.

And he still loves Friday night highlights, he said, adding that it’s fun to see students’ excitement when the television cameras are rolling at a game.

A typical workday for him begins at 2 in the afternoon, he said, and runs to 11:30 or midnight.

Line up set for ‘Jamz’

Issues band will return to the stage for July Jamz ` July Jamz maybe a little more than a month... read more