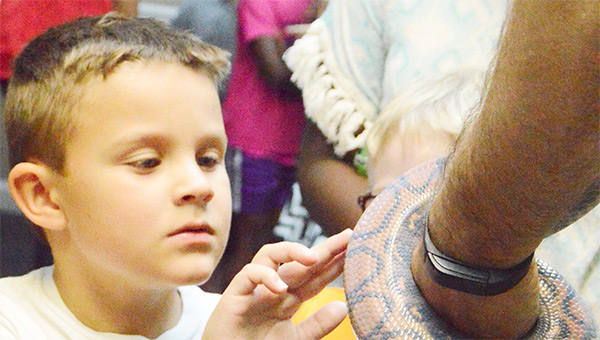 The Andalusia Public Library on Thursday kicked off its annual summer reading program with Animal Tales.

Ham introduced children to Cyrus an Egyptian fruit bat and talked to them about echolocation.

Children learned that echolocation is the location of objects by reflected sound and that Cyrus was nocturnal.

Next, Ham brought out a Brazilian rainbow boa, which wasn’t it’s usual rainbow, but more milky looking because Oz was about to shed his skin.

Children also got to see a balancing act from a Norway rat named Socrates.

“These are present on every continent except Antarctica,” Ham told the children.

They also met a blind Lanner falcon and a red kangaroo.

At the end of the program, children were able to touch the boa.

The program begins at 3 p.m.

Country and gospel artist Chris Golden will be the headlining performer at this year’s Blueberry Festival. Now in its 36th... read more