Flap steak? Don’t judge it by its name 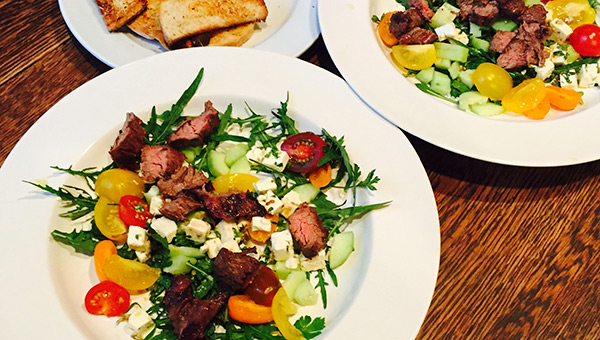 Flap steak does not sound tasty but believe it or not it is becoming as popular as flank or hanger steak. Best of all it tends to be less expensive. I asked for it at Whole Foods and sure enough they verified that it was very popular. I paid $12.99 for a pound but it can be found at Costco for abound $8.00.

Flap meat or flap steak is a thin, relatively lean, coarse-grained steak that comes from the belly of the steer, near the same area as flank steak. Technically, flap meat is part of the bottom sirloin butt, though that’s not really important to know when you are shopping for it. What you need to know that it is known by other names and may be cut in different ways depending on where you live. In the Northeast U.S., flap meat is more likely to be called “sirloin tip,” and it’s often sold in cubes (for kebabs) or in long, fat strips.

Flap meat’s coarse grain makes it a champ at holding on to the flavors of a marinade, which can easily penetrate the loose structure of the meat. And if you marinade has something liked minced garlic or ginger in it, those little bits can snuggle between the meat fibers, where they have less chance of burning. Don’t soak it too long, or you run the risk of the marinade overwhelming the meat.

You can cook your flap meat using any dry heat-grilling, broiling, pan searing-so long as the heat is relatively high. High heat makes for better browning and crispy, charred edges. Cooked flap steak should always be thinly sliced across the grain to make those coarse meat fibers easier to chew.

The June/July issue of Fine Cooking had some fabulous recipes for flap meat. I chose the recipe using flap meat in a Greek salad with marinated feta. It was fabulous and easy and good enough for company.

So for summer grilling I would go out and get some flap meat and give it a try.

1 lb. beef flap meat, cut into pieces or even thickness, if necessary

5 oz. baby spinach (about 5 packed cups) (I use my arugula instead.)

In a medium bowl, whisk 3 Tbs. of the oil with the garlic, oregano, vinegar, ¼ tsp. salt, and a few grinds pepper. Add the steaks and turn to coat. Cover and marinate in the refrigerator for up to 4 to 6 hours.

Meanwhile, in a medium bowl, whisk the remaining 2 ½ Tbs. oil, the parsley, capers, lemon juice, thyme, and chile flakes. Add the feta and stir gently to coat. Marinate at room temperature for up to 1 hour, or in the refrigerator for up to 6 hours.

Prepare a medium-high (400° F to 475° F) gas or charcoal grill fire. Remove the steaks from the marinade and pat day. Grill, turning every 2 minutes, until cooked to your liking, 6 to 8 minutes for medium (140° F). Transfer to a cutting board, cover loosely with foil, and let rest 5 to 10 minutes. Thinly slice the steak against the grain, then season slightly with salt.

Put the spinach, cucumbers, tomatoes, and olives in a large bowl. Drizzle all of the marinade from the feta over the salad, using a spatula to hold back the feta. Season with salt and pepper, and toss to coat. Arrange on a serving platter or divide among four dinner plates. Scatter the steak and feta over the salad, and serve.

Grill some potatoes this weekend

Memorial Day weekend is here and summer will soon be in full swing. I have begun thinking about grilling since... read more