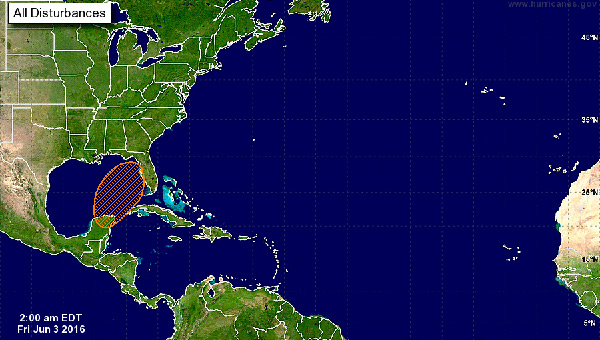 All eyes are on the southern Gulf of Mexico as the potential for a tropical depression or storm sometime next week is increasing. Forecasters say it is still too early to determine if a storm will develop or where it may go.

“There have been no changes to the timing of development of the system in the Gulf this weekend, other than the National Hurricane Center bumping the chance of development up to 50 percent,” said EMA Director Susan Harris. “We will continue to monitor.”

According to the Weather Channel, a cluster of thunderstorms was already flaring up in the Caribbean near the Cayman Islands Friday.

Forecasters say a broad trough of surface low pressure could form in the southern Gulf near the Yucatan Channel.

Additionally, Harris said they are looking at increasingly higher chances of rain as an upper system over Texas moves toward the area, which will increase chances of rain.

“There may be some strong to severe storms mixed in with the precipitation activity, but we are not expecting any organized system moving over us,” Harris said. “Rainfall totals for Saturday until the rain moves out Monday night is looking like a general on to two inches, with locally double that in some localities. Localized ponding is possible, but organized flooding in the rivers or otherwise is not.”

Harris said the biggest predicted problem will be along the coast.

“With the system sending an increasingly higher and longer period swell to our coast beginning early Sunday, the risk of rip currents will increase along with nuisance flooding possible along the coast,” she said. “The greatest possibility of this looks to be in the early Monday through Tuesday time frame, peaking with high tide in the late morning hours Monday and Tuesday.”