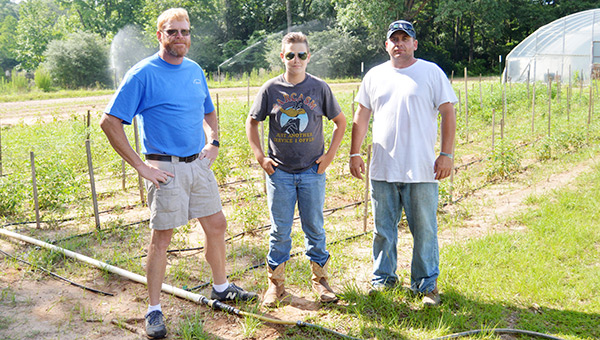 Red Coleman, Dale Coleman and Chad Little take a break from working. Red’s son Dale comes out to the farm to help quite a lot.

“This farm teaches them how to work and gives them something to focus on,” Red Coleman said. “We have 12 men in the program, and they work in three groups of four, on the farm, the lawn care or construction crew. We also have a women’s program and some of them have been helping us pick blueberries.”

“I grew up in Geneva and I learned how to work on granddad’s farm,” Coleman said. “Then drugs got me away from that. Work and stuff just falls by the wayside when you’re on drugs.”

Coleman said that he truly enjoys seeing the guys out there working.

“It does more than just teach them to work, it teaches them self worth,” Coleman said. “When they can be a part of something and watch something that they planted and cared for turn it to something they can eat. We were just out there eating a few of the cherry tomatoes. It’s a blessing to see them with something that doesn’t slip through their hands.”

The men and women in the Crossover Ministry recovery program contribute to the farm in many ways.

“Right now after the rain, we are fighting back the weeds,” Coleman said. “We have a fine group of men and women out here. With the guys, each group starts out with about 24, but it usually goes down to about half of that. Some just aren’t ready for one reason or another. This group we have right now is one of the best groups we’ve had. They are at the halfway point of the six month process, and I believe that all the ones left will graduate.”

Crossover Ministry Produce sells a variety of fresh fruits and vegetables, and also make their own cane syrup (made from sugar cane they grow) and salsa.

“We have been picking squash daily,” Coleman said. “Our tomatoes are just starting to be picked and the blackberries are almost ready. The majority of the farm is peas and corn. The corn is still young and I’m having to constantly fight the deer off the peas.”

Coleman said that he just planted decorative pumpkins to sell in the fall.

All proceeds made at the produce store go into helping with the day-to-day finances of the Crossover Ministry program. The program cost around $30,000 each month to run, and the proceeds from the store don’t come close to touching that, Coleman said.

“We couldn’t do it without all of the donations we receive from the Dixon Foundation, churches, Christians and just good hearted local people,” Coleman said. “It’s not about the money, the biggest thing is about giving these guys opportunities to better themselves through work and with Christ.”

Crossover Ministry Produce is open on Tuesday, Thursday, Friday and Saturday from 8 a.m.-4 p.m. It’s located on Hwy. 84 between Andalusia and Opp.