After Opp City Schools failed to make Adequate Yearly Progress several years ago, it was its approach to continuous improvement that got it recognized as by the Public Affairs Research Council of Alabama for being most improved in math. 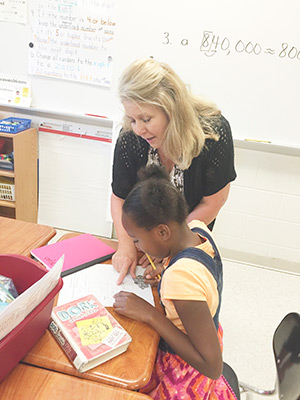 Mrs. Diane Calhoun talks with a student in her class on Wednesday.
Courtesy photo

Instead of explaining its shortcoming, local school officials took the opportunity to rethink its approaches and sharpen its focus on instruction throughout the system.

They formed a team of instructional leaders, which included system-level personnel, key teachers and the reading coach, who attended professional development throughout the state.

At the same time, the system implemented new state standards in English and math.

The system’s team then delivered what they had learned to their fellow teachers in the schools. With the advent of the new standards, math was a particular focus. In examining the standards closely, Opp educators determined that their standard math materials provided the GO Math curriculum did not completely match up with the new standards. In searching for supplemental material, the staff found EngageNY, a comprehensive and free collection of Common Core-aligned materials created and maintained by the New York State Education Department, to be particularly useful and accessible.

“It’s one thing to have the data,” said Sharon Spurlin, who currently serves as principal at OMS, but was previously the system’s director of student services. “It takes creativity to get into the data.”

The system implemented strategies and objectives such as one used in Diane Calhoun’s fourth grade class, in which students were exposed to the learning objective for the day on the blackboard.

Calhoun clustered their desks into groups.

Rather than lecturing the students, she allowed the students to lead the exploration of the problem.

“A straight line is 180 degrees. Two lines projecting up create three angles. If you know the measurement for two of the angles, how do you solve for the third?”

Students presented their work and explained it.

Calhoun, who is a 20-year teaching veteran, said she was nervous when she was challenged to do something different than the traditional approach to math. “I thought they wouldn’t understand,” she said. “Students are taking ownership. Students are playing a bigger role in class.”

Last year, OCS had the most math improvement in the state of Alabama, with gains in grades 3-8.

“The credit goes to the teachers and students at OES and OMS,” said Assistant Superintendent Emily Edgar. “The effort was from kindergarten to eighth grade. It is so important that each grade level understand their role in the progression and teaching of foundation skills needed in mathematics. The diligence of delivery and appropriate resources are key components as well. Through much discussion, disaggregation of data, professional development and change in curriculum, we were able to see the growth on our math scores.”