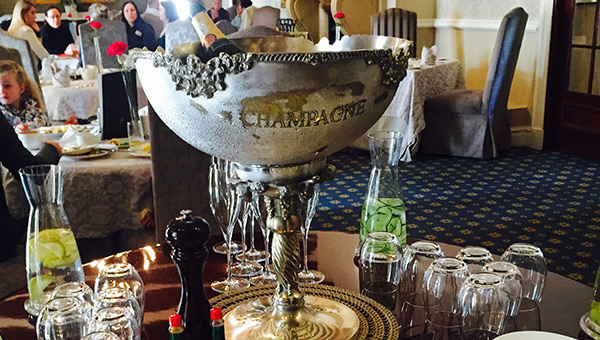 Shown is the buffet at Lanzerac.

The weather in Cape Town was just perfect every day. It was the end of winter and the beginning of spring so days were sunny and around 70 degrees. We spent one day driving down the peninsula to the Cape of Good Hope and Cape Point, the most southern point on the African continent. On our way there we stopped to see a penguin colony. They are in a protected preserve but the walkways allow close observation. This jackass (so called by the way they sound) penguin is more politely known as the African penguin. The breeding colony settled there in the early 1980s, much to the horror of the residents who had to deal with the penguins in their yards, and now that they are protected by the National Park, they have to deal with busloads of tourists. 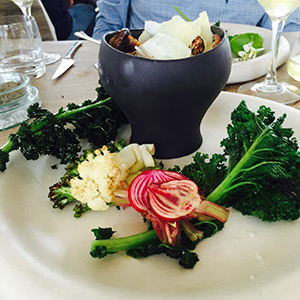 Signs abound warning that baboons are dangerous. We encountered one ambling down the road. I slowed but did not stop. The animal was not interested.

We had lunch at Cape Point at a restaurant called Two Oceans, a take on the merging of the Indian and Atlantic Ocean. Geographically they are said to meet somewhat more east but the Cape of Good Hope is considered to be the division by most. We were not hungry but had some oysters on the half-shell, a shrimp fried with a panko coating, and a delicious tuna dish with avocado. Our wine there was a pinotage which we found to be our favorite wine and did end up ordering some to ship home. Pinotage is a South African variety (although now grown in other countries).

Next door to the Cellars in Constantia is Kirstenbosch Botanical Gardens—billed as the most beautiful garden in Africa. It is extensive and like a lot in the Cape, climbs up the back of Table Mountain. Although it was early spring and the trees were just beginning to leaf out there was still a lot in bloom. The clivia were just starting; the agapanthus not yet. The highlight of bloom was I think the bird of paradise. These strelitzias were everywhere in the garden, especially the yellow one developed by Kirstenbosch and named for Mandela. The gardens we toured were as good as those of England. The climate and the plants and the mountains make for a special show.

The next few days were spent in the winelands of Stellenbosch, where we stayed at one wine estate called Lanzerac. This was also a lovely place and had the largest bathroom so far on this trip. We were given a tour of the cellars and given a free wine tasting. Some were very good and we did decide to ship some home along with the pinotage mentioned above. 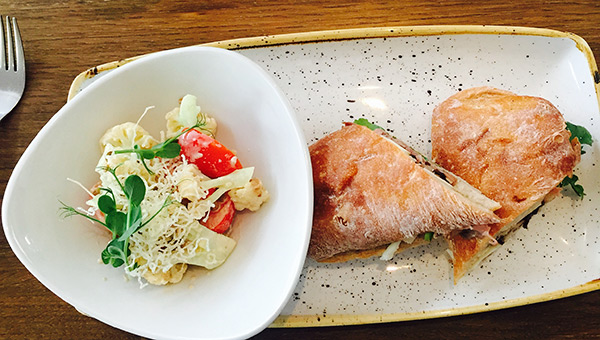 Shown is a delicious lunch at Vergelegen.

We spent our time in the winelands visiting others wineries and having lunch at some of them. A favorite was Vergelegen, built by Willem Adriaan van der Stel who took over from his father as governor of the Cape in 1699. This is said to be Nelson Mandela’s favorite and it has also hosted Queen Elizabeth II and the Clintons. We toured the estate and the manor house. We had a lunch in the stable bistro of a delicious roast beef sandwich with and a salad of roasted cauliflower and lentils. Even with a glass of wine the meal was only around $20 for the two of us. What a deal!

Take some ciabatta bread and put on the roast beef, some arugula, cheese and caramelized onions for the sandwich. Cook the lentils and put in the bottom of the bowl, add roasted (or even raw) cauliflower, some cherry tomatoes sliced. Salt and pepper to taste. They had some crunchy rice noodles but I would forget that. A glass of red wine.

Another winery was Babylonstoren. Although this is a wine estate they have an extensive kitchen garden to service their restaurants. This perhaps was the most interesting lunch of all. The restaurant was called Babel and was truly a farm to table restaurant. We were offered an array of vegetables to pick from with our olive oil and beetroot hummus. This I had never seen. Our appetizer was a steamed cabbage parcel filled with spicy prawns and lightly smoked trout bobotie, served in a fresh orange blossom broth. You poured the broth over the packet and over the vegetables in the dish. It was truly inventive. My main course was risotto with cultivated mushrooms and spinach. It had the most wonderful earthy taste and was the best risotto I have ever eaten. I told the chef that also.

Another wine estate that caught our attention was Boshendal, said to be one of the most photographed wineries. They too have a large kitchen garden. We were there early and had tea by the fire in the café instead of wine.

The Cellars did not have the raw oysters and champagne but we enjoyed them every morning at our last hotel, Lanzerac. Our last night we enjoyed dinner on the terrace at Lanzerac, starting with 12 oysters on the half shell (from Namibia according to the waiter), then a somoosa with a chutney and ending with a prawn and chicken curry. This is Cape Malay fare and I plan to explore that with my new Cape Malay cookbook.

On our way to the airport (the flight left at 11 p.m.) we made a visit to the Groote Shuur Hospital where Dr. Christiaan Barnard preformed the first heart transplant 49 years ago (1967). The hospital section where the surgery was done has been converted into a museum and they do a great job of telling of the surgery but also the story of the people involved, the impaired driver who killed the lady who donated the heart. The story of the donor’s family and the recipient’s family. And the story of the doctor who did the surgery. I would put this as another must do for Cape Town.

I will be using my two new cookbooks in the weeks to come to discuss Cape-Malay cooking and some other recipes from the Cellars-Hohenort Cookbook.

It was a delicious trip! Good value for your money! I would suggest you go!