Lack of space leads to innovative approach in classroom at SES 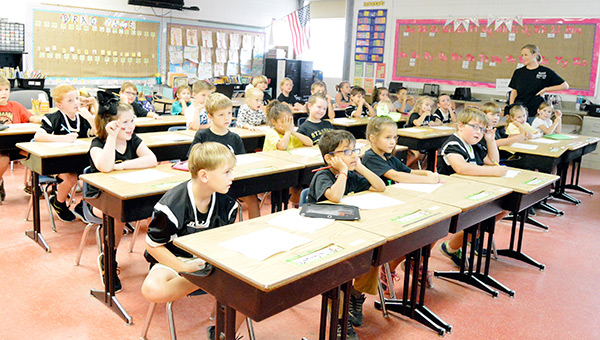 Shown are 30 first graders in the combined class of Caty Wilson and Stacy Varner.

When the Covington County Board of Education said that Straughn Elementary School was running out of space and there was a need for an addition – they weren’t exaggerating one bit.

In fact, when SES Principal Bettye Anne Older received word that the school had received an intervention grant to allow for a second Pre-K class, she and others had to think outside the box to accommodate the new classroom since the new addition hadn’t even begun.

“We had two first grade teachers willing to collaboratively teach,” Older said. “We knew we had space limitations.”

Stacy Varner and Caty Wilson were up for the challenge.

“They’ve done this basically on their own,” Older said. “And there are 30 students in one classroom.”

While that may seem like a lofty task, when officials are often worried about the number of students in a classroom, but more than a month into the school year, Older said it’s proving to be a successful model.

“One teacher can take a group and work on a certain skill set and the other can do intervention,” she said. “It’s allowing them to accelerate the curriculum. They are able to move through the curriculum.”

“They have lots of energy,” she said. “This is a pilot project for us and something we have never done before, but our parents are very pleased.”

Hopefully, this will only be a one-year thing with the school board OK’ing the low bid for the new, eight-classroom facility on the backside of the elementary school.

Varner and Wilson said they were able to arrange the desks and tables in such a way that the number does not feel overwhelming, and the room is also functional.

“All 30 students receive instruction from both teachers in whole and in small group every single day,” Varner said. “The variety of teaching styles is a great benefit to all of the students.”

This will be the rotation every half of the grading period so that both teachers have the opportunity to teach all subjects and so that the students can get different perspectives on the subjects as well as a variety of methods and strategies.

During small group/center time, the students rotate among several different areas in the room to receive re-reinforcement of the skills that are being taught.

Currently, they have a technology station, a math manipulative station and two small groups stations with both Varner and Wilson teaching small group math or reading in groups no larger than six or seven students.

“With a class this size, communication is a key factor in students’ success, and one important tool we use is the Remind 101 App for fast and efficient responses,” Varner said. “When it comes to parent-teacher conferences/phone calls, Mrs. Varner and Mrs. Wilson both participate in these because all 30 students are being taught, mentored, disciplined, and cared for by both teachers.”

The pair agreed the new adventure was a bit scary because they had never taught in that type of setting before this school year.

“We have since found our groove and have been able to successfully navigate our teaching and instructional time with and around each other,” Varner said. “Having a co-worker/friend is always a good thing to have around when you need to bounce ideas off of each other. We can use each other as a very beneficial resource, and in the end we feel as though the children will benefit the most from that.”