The next Fort Dale Academy Athletic Hall of Fame inductee has neither a single touchdown pass nor a championship-winning seasons to speak of.

But his numerous contributions to the realm of athletics at FDA are difficult to ignore. 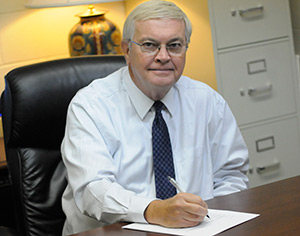 Longtime FDA headmaster David Brantley will join the hallowed ranks of hall of fame inductees Friday at 6:45 p.m. prior to the Eagles’ homecoming showdown with the Sparta Academy Warriors. A reception honoring Brantley will be held in the school library beginning at 6 p.m., where all are invited to attend.

Brantley, who has grown accustomed to helping induct various members of the FDA community into the very same class he now belongs in, said that he considered it an honor to be counted among their ranks.

“There are some really good people—some very fine athletes and coaches that have been inducted over the years to the hall of fame—and I’m honored to be in that group,” Brantley said.

Brantley, a native of Brewton, Ala., is a 1966 graduate of T.R. Miller High School. While in high school, David played football and basketball. Following high school graduation, he attended Jeff Davis Junior college on a basketball scholarship, was later named to the school’s Alumni Hall of Fame.

Brantley began his teaching and coaching career in Atmore, Ala., with the Escambia County School System, where he played a role on the coaching staff on the 1974 state championship football team.

After only three years in the school system, he was appointed as assistant principal at A.C. Moore Elementary School. The following year, he was named principal and remained in that position until his appointment as principal of Escambia County High School in 1979.

After two years serving in the capacity of a high school principal, he was appointed the position of superintendent of the Escambia County School System.

While in Escambia County, he initiated the Drug Free School Program, which received national recognition in 1987.

“When I started in school administration many years ago, I was taught that you needed to be a part of the total school program in every way, and I love athletics. I played athletics and I coached athletics, so it’s been easy for me to be a part and support our student-athletes and games all over the place. It’s been a pleasure, and I’ve loved every minute of it.”

Brantley added that it is still a joy to come to work each and every day.

He and his wife of 45 years, Janet, live in Andalusia where he serves as a active deacon in the First Baptist Church. They have one son, Mitchell, who is an emergency medicine physician in Pensacola, Fla. Mitchell and his wife Karen have two children, Grace, 12, and Max, 9.

Brantley said that the support of his family has enabled him to devote much of his time to his career. His spare time is filled with sporting events, playing golf, and spending time with his grandchildren.