On the birding trail 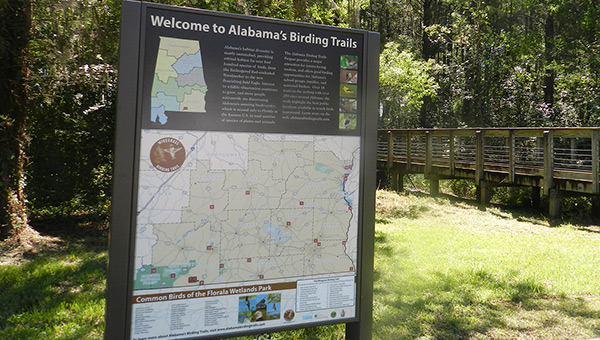 On the boardwalk that meanders through the Florala Wetlands Park, a man sat enjoying his lunch.

Asked if he was aware he was in the midst of a birding trail, he said, “Really, I just bring my lunch here sometimes. But we do have birds of prey.”

Harry said he sometimes sees a Blue Heron fishing, and in the cold weather months, when the black coots are around, he also sees eagles hunting.

“You hear them,” he said, “then they swoop down and get the black coots.”

The wetland park has been on the Alabama Birding Trail for quite some time, but recently, signage was added to the entrance designating it as such. Tuesday, the sign was officially unveiled.

Joanne Ninesling, who works with the Alabama Birding Trails, said there are eight trails and 270 sites in 64 counties included in the trails.

“The signs are part of our marketing and promotion,” she said. “We promote them in areas that are practical.”

Entrance to the trail is near the Alabama/Florida line on Alabama Hwy. 55.

No one keeps track of how many people bird watch in Florala, or in a companion trail in the Conecuh National Forest, but Ninesling said in Eufaula, the trail attracts at least 200 people a day.

“People who are in to this will drop everything for the chance to see a bird they’ve never seen before,” Ninesling said.

Most of the stops on Alabama’s birding trails have no entrance fee, or minimal fees, Ninesling said.

Here, members of the Forest Service work with timber harvesters to cut trees in the national forest. Eighty years ago,... read more