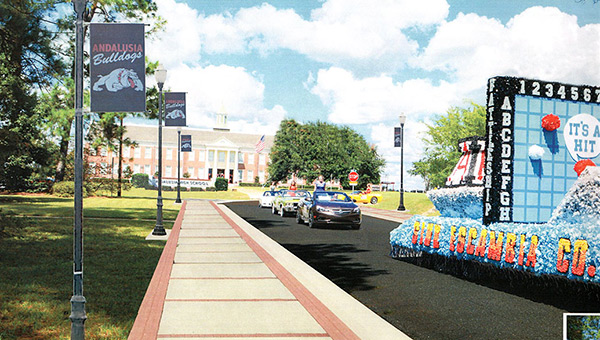 The engineers’ rendering of proposed improvements to Third Avenue.

Members of the Andalusia City Council held a workshop meeting on Wednesday to begin setting goals for the next four years.

“If we don’t set goals, we tend to not get anything done,” he said. “In our last term, we set as our major goal the renovation of South Three Notch Street, and we have that in place.”

The construction project has been approved, contracts have been awarded, and the project will begin in the near future.

Now, one of the projects the mayor is asking council members to consider is improving Third Avenue, which approaches Andalusia High School from East Three Notch Street.

“This is not a thoroughfare, but one of the major streets in town,” Johnson said. “A lot of people use it, of course, by the nature of it being where it is. It is very visible to people visiting our community, whether going to the high school, or driving through our town.”

Hudson estimated the project would cost $1.2 million if done in one phase; more if broken into three phases.

Hudson said he is looking for grants for which the project might qualify.

Hudson also presented a proposal to build a sidewalk on Sanford Road from East Three Notch to the Bypass. The estimated cost for the 1.67 miles of sidewalk is $535,031, and Hudson said he believes the sidewalk project would qualify for a federal transportation alternative grant.

Councilman Sconiers asked to have construction of a sidewalk on South Cotton St. from Watson to Whatley Street added to possible projects.

The council also discussed the possibility of changing the way it awards pay increases.

SMILIN’ IN THE PARK