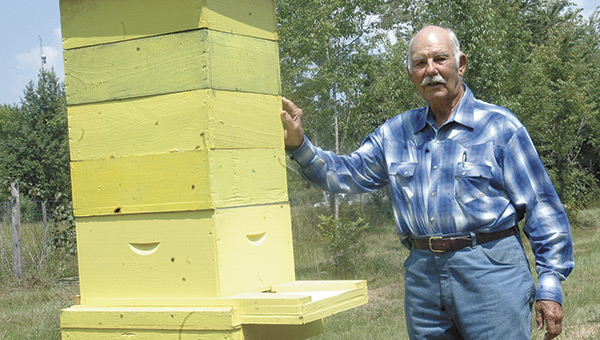 This 2010 file photo shows OJ Blount with one of his beehives.
File photo

OJ Blount is known as being the local beekeeper and he’s sharing his secrets in his new book.

Blount, who is a World War II and Korea combat veteran, has released a book titled “Beekeeping Logic by OJ Blount: How a Poor Farmboy Developed the Queen’s Castle.”

Shown is the book written by OJ Blount.
Courtesy photo

In the book, he shared his 40 years or knowledge in the art and science of beekeeping from his first experience with honeybees in his squirrel house to his latest beehive design.

Blount was the oldest of seven children and a son of a sharecropper in Arkansas.

During his childhood, his family traveled from farm to farm working.

At his home south of Andalusia, he has established a bee sanctuary home to at least 50 beehives on his 29-acre property.

Seven times a year, Blount invites people to his home for bee workshops.

He promotes his commercial beehives that he modified to allow for chemical-free beekeeping.

At 90, Blount is in the process of building a club house.

“In the club house, you can see me take off honey,” he said. “It has big windows.”

The club house is 30 feet by 50 feet and when completed will feature an office, kitchen, pantry, large meeting area and bathroom facilities.

“It’s going to be nice once completed,” he said.

His book outlines his plans for beehives, he said.

He also descirbes his queen’s castle, which is special.

“I modify the bottom section, which is normally a wire mesh and I change it to a 22-gauge metal with five-thirty-secondth holes in it,” he told the Star-News previously. “This allows only a small amount of air to come in and bugs can’t get it. This makes it where I don’t have to use any chemicals.”

Proceeds from his book will go to help finish the clubhouse, he said.