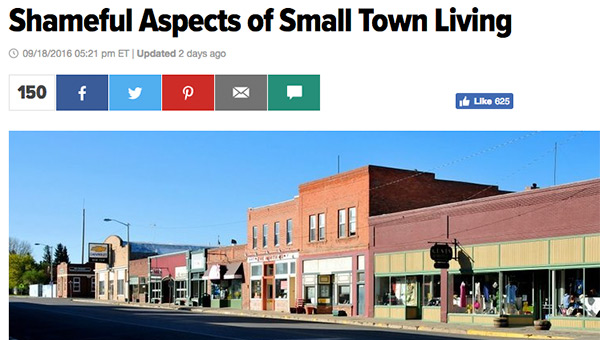 Riley Hammonds said he isn’t exactly sure what to think.

Earlier this week, he posted an article he wrote about small town living on the Huffington Post’s contributor forum. The Huffington Post is an American online news aggregator and blog that has both localized and international editions.

In his blog post, the Andalusia native does not specifically refer to his hometown by name, but he does provide links to news stories about some of his topics.

“Growing up in a small town was a good experience,” was his opening sentence. After explaining that he made the choice to move home to raise his family, he added, “The bad part about moving back was that I began to see that small mindedness ran rampant in this community.”

He goes on to address the condition of downtown buildings, the stigma attached to those who aren’t active in a church, the job market, the decision by the former probate judge to close the marriage license division, and high bond amounts for those charged with possession of marijuana or synthetic marijuana.

“While I am sure this article won’t sit well with some, I know there are a number of individuals in my town who think the same way that I do,” he concluded. “Talking about these types of problems is the only way to resolve them and put to rest generations of hate and ignorance.”

He shared the link on his own social media page, and somehow, it caught fire. He never expected the response he got.

“I honestly didn’t know what would happen,” he said.

What happened was that he got lots of people talking. First, there was speculation about whether or not the community referenced was Andalusia.

“People acted like they had solved some sort of Scooby Doo mystery” when they determined he was, in fact, talking about Andalusia, he said. “The thing is, the whole post has links back to articles in the paper or other publications.”

Then, there were both pro and con comments about his blog, and pretty soon there were people arguing on social media. Meanwhile, at least two people – Chris Jackson and Walt Merrell – wrote 1,300 to 2,400-plus word essays sharing their own thoughts about small town life, and specifically religion.

“My wife and I lived in Milton,” he said. “When our son was about to be born, we came back here because it was where I grew up. Our kids love their school and their sports. Basically, the same reasons anybody came back here.”

“My wife was doing this before we moved,” he said. “I was helping her some. It kept growing, so eventually, I quit the job I had here to work with her.”

Overall, he said, the response has been good.

“Honestly, the response has been mostly positive,” he said. “It’s had 615 likes within four days and more than 150 shares on Facebook. I’ve gotten some flack from other people. The things they bring up aren’t even covered in the article.

“Some people have reading comprehension problems,” he said.

Register to vote by Oct. 24