Ever tasted Cape-Malay cooking? When South Africans talk about traditional foods, these are some of the flavors and influences they are referring to. Masala, bobotie, Malay curry, roti, bredies—they are part of the country’s distinctive “fusion cuisine.” This fusion was blending of colonial French, Dutch, English and Malaysian influences. If you take a sniff walking through Cape Town’s Bo-Kaap area these are the spices you will smell—cardamom, coriander, cumin, cinnamon, turmeric, ginger, garlic, and chilies. 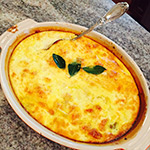 I tried two of the dishes that define Cape-Malay cooking this week and was surprised how good they are and really how easy. The first was a bredie, which is a stew made with a meat and vegetable, slow cooked in a fairly saucy gravy often referred to as lang sous (sauce that is fairly thick and plentiful). This would be a great dish for the fall. I choose a cauliflower bredie since I read it was the holy grail of bredies. The one thing perhaps that is different in Cape-Malay cooking is the use of sugar (even a little) in all the dishes.

Taken from Cooking for my Father in My Cape Malay Kitchen by Cariema Isaacs.

Heat 1 Tbsp. oil over a medium/high heat. Add the onion and chili.

Cook for 2-3 minutes, stirring frequently, until the onion is lightly browned. Season with salt. Add the meat and continue to cook over a medium/high heat, all the while searing the meat and browning it evenly. Add the sugar and cook for a further 5 minutes.

As the meat and onion are just about to catch on the bottom of the pot, add 1 cup of the water to the braised meat.

Ensure that you stir the meat and gently scrape any bits from the bottom of the pot. Cook over a high heat for 5 minutes, covered and 2 minutes uncovered.

As the moisture evaporates again, stir the meat until you notice it browning again and add another ½ cup water. Cook, covered, for a further 5 minutes over high heat.

Arrange the cauliflower florets on top of the meat and add the remaining ½ cup of water.

Turn the heat down to a medium and simmer for at least 45 minutes.

Gently wedge the quartered potatoes in between the cooked ingredients and cook, covered, for a further 20 minutes over a medium heat. Should taste for seasoning and add more salt or sugar to taste.

Cook, covered, over a medium to low heat for 15-20 minutes more, allowing the potatoes to soften.

Add the remaining 1 Tbsp. of oil and remove from the heat.

Serve with hot fluffy rice and accompanied by a vegetable.

The next Cape-Malay classic is the bobotie. It is basically a meatloaf. Opinions are divided on who brought this recipe to the Cape of Good Hope. There are views that the original recipe was introduced by the Dutch and that spices were later added by the Indonesian cooks who worked for them. This classic is prepared in three stages which makes it different from another version of an Indonesian meatloaf dish called botok daging, which hails from the city of Jakarta. In this recipe the onions are braised, then added to the raw meat, then partially baked in the oven and then topped with a yellowy egg custard and baked until golden.

Taken from the same cookbook as above.

For the egg custard:

For the meat loaf base:

Place all ingredients into a bowl and whisk to form a smooth and runny batter, similar to scrambled eggs or an omelet. Set aside for later.

Heat the oil over a medium heat, add the onion slices and fry for 5-7 minutes are slightly golden and translucent.

To this add the crushed garlic and powered spices, as well as the salt and sugar, and allow this to cook for a further 5 minutes. Remove from the heat.

Place the minced meat, eggs and bread in a mixing bowl, add the warm ingredients and mix to form the meatloaf mixture.

Place the mixture in an ovenproof dish and insert the bay leaves. Bake in the oven for 20-30 minutes.

Remove the partially baked meatloaf from the oven and pour the egg custard over the top.

Garnish with the remaining bay leaves and place back in the oven for a further 10 minutes until the egg custard is set and golden brown.

Can serve with sweet yellow rice and/or a vegetable.