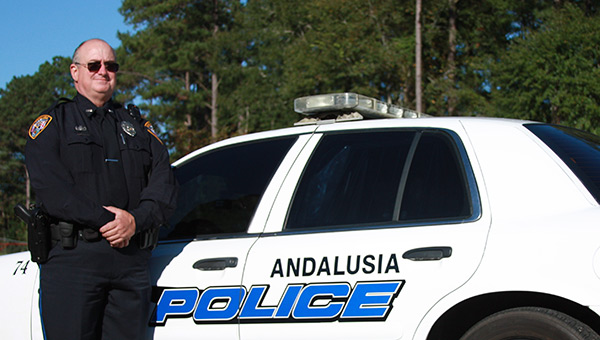 Mike Abraham has been named the Andalusia Police Department’s officer of the week.

Abraham has spent nine years serving the citizens of Andalusia with the Andalusia Police Department. Officer Abraham has a combined total of over 25 years of police service experience from Albuquerque, New Mexico to Jacksonville, Florida. In addition to his law enforcement career, he is also a Retired Chief Petty Officer with 28 years of combined Active Duty and Reserve time.

Officer Abraham currently serves in multiple capacities at the Andalusia Police Department. He is lead bomb technician, a member of the Covington County Incident Response Team, and serves as a field training officer. Officer Abraham is supervised by Sgt. Anthony Hattaway and Lt. Timothy Stallworth as a member of “D” shift.

His favorite football team is the Alabama Crimson Tide but says you can catch him in some occasional orange and blue while he’s pulling for the Florida Gators. He loves seafood and his favorite past time is fishing. His long term goals are to retire from the Andalusia Police Department when he gets older but he wants to remind all the young officers he’s not old, yet. His favorite shift to work is every day that he is blessed with. He doesn’t take one day for granted.

“Having an experienced officer like Mike is invaluable to APD,” said Chief Paul Hudson. “He’s always willing to step up and help not only in the day to day work as a police officer but he is willing to help out with community events, fundraising efforts, and anything to help a fellow officer. I’ve watched him spend countless hours on a firing range with officers who need extra help with their firearms for no pay, just to help out a fellow officer. You can’t ask for a better all-around officer. He takes the job he does seriously and knows his job. If you want it done, ask Abraham. That’s our motto.”