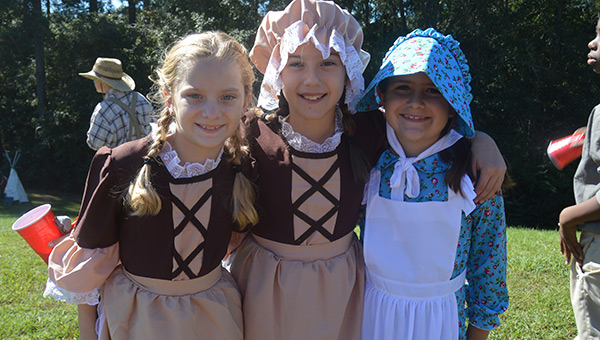 Fourth graders at Opp Elementary School dressed up in pioneer days attire, and learned more about the era Friday.

Students learned the history of Weatherford and more about the Creek nation.

Weatherford told the students that the lands around here belonged to the Muscogee nation.

Weatherford also taught the children about Tecumseh, who opposed the United States and thought it was best for the Creeks to fight rather than lose their lands.

Weatherford said he favored peace, which he learned from his mother’s brother, Creek chief Alexander McGillivray.

The Pike Pioneer Museum brought artifacts from the era to show the students, who learned to shuck corn.

Students participated in a classroom experience in a one-room school.

One of the main things students said they didn’t realize was how many students were in a one-room school.

“There were so many older kids in with the younger ones at school,” said Maddie Barnes.

“Each grade had to fit in the school,” said Adrienne Walker.

Domniken Jones said he was surprised that teachers had so many grades to teach.

Others observed how they toys and clothes have changed.

Brooke Keith said they girls didn’t play with that they do now.

“They didn’t wear the same style we wear either,” said Addison Moseley.

Kenli Catrett said that pioneers also didn’t have as much stuff as students do now.