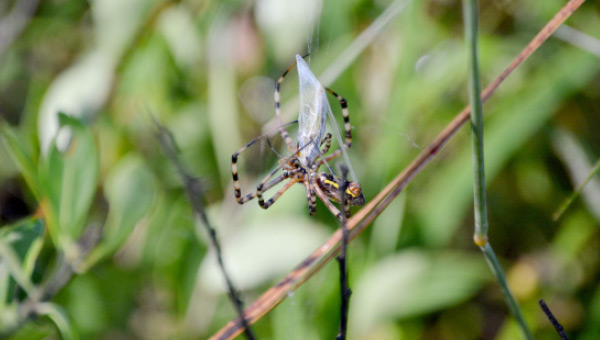 Two busloads of nearly 75 people took a guided tour of the Conecuh National Forest on Saturday to mark the 80th birthday of the national park.

“Our purpose is to help people in our community better understand the value of the Conecuh National Forest, which is in their backyard,” District Ranger Tim Mersmann said. “There is nothing like getting out and seeing it, in a guided format. This tour was a ‘birthday bus tour’ to recognize that 2016 is the Conecuh’s 80th year of existence as a national forest.”

Eventgoers got to hold an indigo snake during the tour of the Conecuh National Forest.

The tour group started at Salt Pond where national park herpetologist Jimmy Stiles talked to the group about the different reptiles and amphibians that inhabit the forest.

“The Carolina Gopher Frog is a type of frog that only breeds in eight ponds in the state of Alabama, and six of those ponds are right here on the Conecuh National Forest.”

Stiles also talked to the group about snake species such as the Indigo and King Snakes that have virtually disappeared from the area.

This gopher tortoise makes his home in the forest.

“These are very important snakes to this area,” Stiles said. “They help keep down the population of rattlesnakes and cottonmouths, but they have virtually gone from this area now because of now illegally practices that people used to catch rattlesnakes.”

The Conecuh National Forest is currently working on a restoration project to reintroduce the Indigo Snake back to the forest, Stiles said.

After learning about the wildlife, the group traveled to Crawford Bog where they learned about the positive effects of prescribed burns, as well as different species of plants.

One plant that thrives in the bog is the pitcher plant.

The group learned about the carnivorous plant and what it means to the forest.