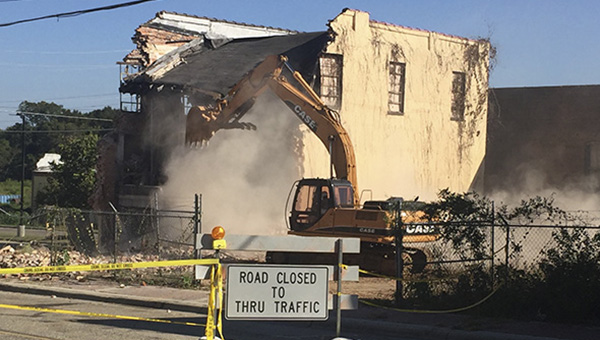 A city crew works to demolish the building at 101 Pear St. Wednesday.

The City of Andalusia on Wednesday demolished property at 101 Pear St. after a local judge dismissed a previous order stopping the demolition.

Circuit Judge Ben Bowden issued the injunction Friday afternoon after John W. Tisdale, Jr., filed a complaint seeking to stop demolition of the building, which the City of Andalusia condemned in an abatement process after Tisdale’s structural engineer deemed it unsafe.

Tisdale missed an agreed-upon deadline to stabilize the building, and the city was preparing to tear it down.

When Bowden issued the injunction, he also ordered the plaintiff to amend and correct his complaint within 24 hours. Bowden said Tisdale had no standing in the case, as the property is owned by Tisdale Family Properties, Inc.

The view from the South Three Notch side of the building.

Bowden also ordered the plaintiff to post a $50,000 bond securing the payment of costs, damages, and reasonable attorney fees that might be incurred if it was determined that City of Andalusia had been wrongfully enjoined.

Firefighters continually sprayed down the site to keep down the dust from crumbling mortar. This view is from South Cotton Street.

Later, Bowden denied a request to amend the original complaint because he said it was not properly filed. He cancelled the injunction Tuesday night after Tisdale failed to post the bond by the 5 p.m. deadline on Mon., Oct. 3.

Meanwhile, Tisdale and Greg M. Cooper were cited for working on the structure. Twice on Saturday, Building Inspector Richard Moore was on the site, and said he reminded both that they were working without a building permit and in violation of a stop work order.

A city employee watches the demolition.

On Monday, local officers issued citations to each and ordered them to appear in municipal court Monday night. Tisdale was cited for no building permit; Cooper for no license. Attorney Grady Lanier entered “not guilty” pleas for each, and Andalusia Municipal Court Judge Mike Jones set the cases for Mon., Nov. 28.

The building was demolished in sections.

Lanier had no comment after the municipal court appearance.

Tisdale declined comment Tuesday night about his failure to post the bond. After watching most of the demolition on Wednesday afternoon, Tisdale also declined to comment on the demolition.

The site was secured at the end of the day, and the previously closed streets that had been partially closed since Sept. 6 were reopened.

The portions of Pear Street and South Cotton Street that had been closed were reopened Wednesday night.