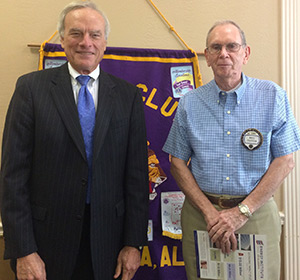 Seth Hammett was the guest speaker at the Andalusia Lions Club on Wednesday. He is shown with Lion Bill Patton, who invited him.

Hammett explained that mission of the Energy Institute of Alabama is to promote reliable, affordable and clean energy to help grow the economy, create high-paying jobs and build public support for Alabama’s energy industry.

“The goal is for us to speak as one voice,” he said. “Energy is essential to our way of life. We know that energy must be reliable, affordable and clean.”

Hammett said that having those this is vital to expanding the economy.

He noted that Alabama’s economy is still anchored by agricultural and forestry, but acknowledged that companies such as Boeing, AirBus, Mercedes Benz, Toyota, Remington, Honda and Hyundai also had an important place in the economy.

Hammett, who has been involved in recruiting industry since the 1970s said that energy isn’t the first thing potential candidates want to know about, but it’s in the first five, when recruiting new industry.

“They want to know what kind of energy is available,” he said.

Hammett said energy — more specifically the cost of energy – is what gave Alabama the upper hand when recruiting and securing thyseenKrupp, a steel mill in Cowart to come here.

Hammett said had it not been for Alabama Power Co.’s good rate, the company would have chosen to locate in Louisiana.

That constituted more than 2,600 jobs in South Alabama.

Hammett said having served in public office for three-and-a-half decades, he knows how important influence is with people who are establishing public policy.

That’s why the Energy Institute was created to have one louder voice.

The team has been traveling the state talking fact and fiction when it comes to energy, he said.

They have held meetings with legislators in Tuscaloosa and Spanish Fort and plan meetings in Birmingham where they will have tours of the Miller Steam Plant and a coal mine and coal barges.

Congressional staffers from Washington D.C., as well as state legislators are taking part in these meetings.

Hammett said they plan a session in Opelika, Montgomery, another in Birmingham and one in Hartford.

Hammett said these talks are important because the energy business is changing.

“Economics. Now there is as much electricity – actually slightly more coming from natural gas than coal,” he said. “It’s more because of the price.”

Hammett said at one time the cost for natural gas as at $13 per BTU, and now it’s around $3 per BTU.

“Fracking changed everything,” he said. “It has revolutionized.”

Fracking is the process of drilling down into the earth before a high-pressure water mixture is directed at the rock to release the gas inside. Water, sand and chemicals are injected into the rock at high pressure, which allows the gas to flow out of the head of the well.

Another way the industry is changing is through public policy, he said.

The Environmental Protection Agency has imposed the Clean Power Plan, but the Supreme Court in February granted a stay halting its implementation.

Hammett said if the EPA is successful it will cost billions of dollars.

He said the Energy Institute isn’t taking sides on the issue, but is rather explain fact and fiction about the issue.

Hammett also talked about wind and solar energy, but said while it’s important, it can’t be the only answer.

Hammett shared a story with Lions that sums up the importance of what the Energy Institute is working on.

He said that as a young boy, he and his grandfather would drive from Rose Hill to Dozier to get their hair cut.

On the way, they would pass a home where Mrs. Scott, a widow lived.

He said in the winter they would see her in the car shed to stay warm. In the warmer months, she would be under a shade tree or on the porch.

“My granddaddy said she was just getting by,” he said.

She would listen to the news on her radio and then unplug it and put it in the box until the next time she listened to it.

When she purchased an electric stove, she asked the installers not to put it against the wall so she could unplug it when she wasn’t using it because it had an electric clock.

“So people are just getting by,” he said.

Hammett said that’s what he tells policy makers that the industry can handle the costs of the changes associated with policy, but is it something that Mrs. Scott can handle?

200 quilts to be featured in upcoming quilt show