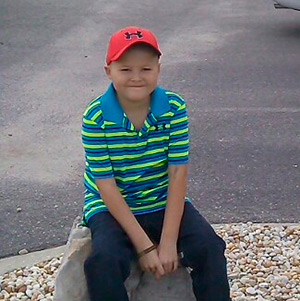 Kevin Crawford has been named the second Cancer Freeze recipient.

Crawford is a starter on the peewee football team.

“Up until about three months ago, he’s always been very healthy with no question of any problems,” said mom, Samantha Coward. “All of a sudden, he stopped eating and had no energy at all. Every time he ate or got hot, he would throw up. He normally had a great appetite, and loved going to school and playing football. So, this was very unusual for him.”

Cowart said that they made several trips to the doctor, and tried anything they could think of to get Kevin to feel better.

“After three weeks of going back and forth to the office, the doctor and I agreed that we had to get to the bottom of what was going on with him and get him better,” she said. “So, on that Monday morning, Aug. 29, we were sent to our local hospital for labs and an abdominal ultrasound. We were instructed by the doctor to return to his office later that day to discuss the findings of the tests.”

After leaving the hospital, they were called in less than an hour and told to return to the doctor’s office.

“Kevin’s white blood cell count was extremely elevated and his spleen was very enlarged,” she said. “We were immediately sent by ambulance to Children’s Hospital in Birmingham.”

“The treatment plan is three years of intense chemotherapy, which makes his immune system so depressed that at times,. he can’t even leave home or be around anyone that could possibly be sick,” she said. “He cannot return to school for at least six moths. He will then be re-evaluated to see if his immune system is strong enough for him to go back.”

Cowart said they are thankful that Cancer Freeze chose him as recipient.

“We thank you all so much for your support and prayers,” she said. “Please continue to pray.”

Cancer Freeze is set for Feb. 4, at Lake Jackson in Florala.