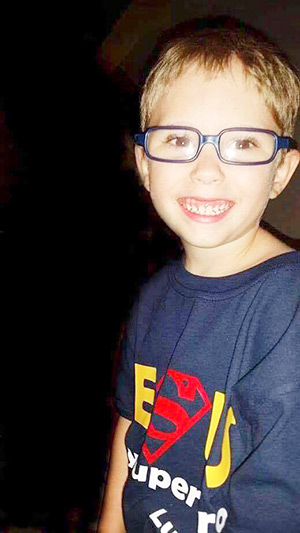 If anything, Hunter Stinson has proven that the man upstairs is in charge.

Stinson, 4, is a pre-K student at Guardian Angel Christian Daycare, and was named this year’s grand marshal of the Christmas parade after receiving the most votes in the Andalusia Area Chamber of Commerce’s voting.

Stinson has mild cerebral palsy and had multiple health issues at birth.

Doctors told his family that he was not expected to live and that if he did; he might be blind, deaf and have developmental delays.

But, Stinson has defied all the odds stacked against him, and is thriving almost as well as any other 4-year-old.

He is described as a blessing to all who encounter him, and strangers are drawn to him.

He is a sports enthusiast and plays T-Ball and soccer for the city of Andalusia.

He is a music lover and says he wants to play every instrument he hears.

He is an active member of the Andalusia Full Gospel Tabernacle, where he enjoys Victory Village and WOW Kids.

He loves the puppet ministry at AFGT, and aspires to one day be on the puppet team.

“We are so happy that he was chosen for this,” Patsy Stinson said. “He has been through a lot in his four years and is such as trooper. He really doesn’t know what it is to be the grand marshal other than Mickey Mouse was the grand marshal for a parade on the Mickey Mouse Show. He’s looking forward to seeing everyone at the parade and said he’s going to share his title with one of his hand puppets.”

Also in the running for grand marshal were:

The parade is tomorrow night.