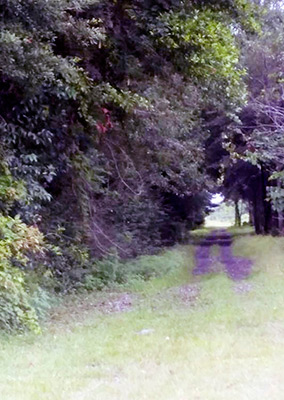 Shown is the undergrowth on Monroe Street. Courtesy photo

Residents are speaking out about what they say is an uptick in the number of break-ins and burglaries on Monroe Street in Opp and the need for cutting down some overgrowth in that area, but OPD officers say they have not reports of those incidences.

Monroe Street is located off of W. Cummings Avenue and Douglas Street in the heart of city of Opportunity.

Tommie Norris, whose mom has a rental property that his sister lives in, said there is all kinds of stuff being stolen.

“Cars being broke into, washers, dryers pure taken off people’s porch and due to the woods along the dirt road, it’s hard for officers to find anyone when in pursuit because it’s all so over Residents are speaking out about what they say is an uptick in the number of break-ins and burglaries on Monroe Street in Opp and the need for cutting down some overgrowth in that area, but OPD officers say they have not reports of those incidences.

Norris said the property in question belongs to the railroad, and he plans to give them a call.

“It’s one block of trees that could help the police a great deal,” Norris said.

“We cannot look up by street name only on our reporting system,” he said. “So, the investigators and I had to go back and look up each burglary reported.”

Chance said he and others at the OPD were not aware of anyone hiding from them in the overgrown underbrush, who are committing burglaries on Monroe Street.

Chance said they did have someone run from police officers a few weeks back who hid in an area on Monroe Street.

“(That person) ran from Dry Street across Cummings Avenue toward the old railroad tracks back toward Covington Avenue, which was east of Monroe Street,” he said. “He was committing a burglary of breaking and entering of a motor vehicle about three blocks over from Monroe Street and just ran to that area trying to get away from us.”

Recently, the OPD said there had been arrests in the past few weeks concerning breaking and entering of vehicles with a great deal of the activity taking place in the west and north sides of the city.

There were also some reported residential burglaries and thefts in which OPD made arrests.

He’s been on the agenda to speak at the city council meeting twice, but unforeseen circumstances have prevented him from attending the meetings both times.

Norris said that there has already been a drug bust behind one of the buildings that has grown up overgrowth behind it.

“The big trees do not have to be taken down, it’s the underbrush that needs to be taken out,” he said. “So visually the police can see down the road and make their jobs easier, as well as protecting the neighborhood houses is giving criminals less places to hide.”

Shirley Ellison, who also lives on Monroe Street, agreed that the brush needs to be cleaned up.

Norris said it’s not been a big deal in the past; however, crime is steadily rising on the street and in the neighborhood.

Norris said his sister has already had to call the police because her neighbor had someone break into his car.

“On April 19, my sister called because someone was breaking in my mom’s car in her yard,” he said. “The alarm went off at the same time residents of 305 Monroe Street found someone breaking in there both the same night and the same time.

Carla Bailey, who lives at 305 Monroe, said the undergrowth creates places for people to hide, and she’d like it cleaned as well.

Norris said the washer and dryer were stolen off a carport at the corner of Monroe and Covington in the last two weeks.

Frank Knight said he was in the hospital in Tuskegee in May when his home was broken into and TV stolen and his home ransacked.

Knight said he would also like to see the area cleaned up to help better protect the neighborhood.