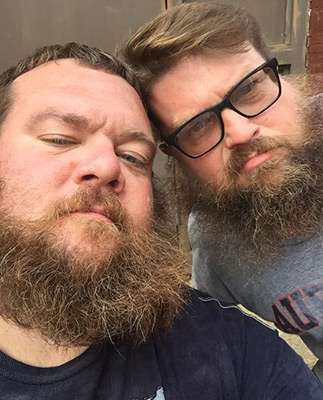 Members of 10-6 Upstairs - who are quite proud of their beards - will perform at tonight’s July Jamz event at Springdale. The event kicks off at 6 p.m.

One could say it’s Crenshaw County night at July Jamz, which will feature two groups that both trace their roots to their teen years as members of an FFA string band and later, the LBW Ensemble.

Pieces of Patsalagi and 10-6 Upstairs, both Crenshaw County groups, and Connor Sowards are the featured artists for the final event in this year’s Jamz series.

Jason Fox of 10-6 Upstairs said all the members of both bands have played together over the last 20 years or so.

10-6 Upstairs was founded several years ago.

“We’ve all been musicians for 20-plus years,” he said. “We had a bluegrass thing we were doing and people wanted more modern and non-bluegrassy things. It kind of spurred from the old dark horse days to some old JB Roberts band stuff. It’s just pieces of several different bands.”

The roots of the band extend all the way back to the 1996 Brantley High School FFA String Band, and grew through college.

“Me, Ben and Paul all were in the LBW Ensemble at different times,” he said.

Fox said the band plays a variety music from Southern rock to blues to a little bit of country and pop and a bunch of other stuff.

“We’ve played July Jamz every year,” he said. “We are excited about coming to play.”

Hudson said that Pieces of Patsalagi is literally what it sounds like – pieces of their band Patsalagi, which was popular in the area from the 1990s to the early 2000s.

“Benjie and I were going to play and then we got Kyle on board, too,” he said. “The last time we really played other than a few things here and there was around 2001.”

Hudson and Sanders playing together dates back to the eighth grade.

“Me and Benjie have played together since eighth or ninth grade and we went to Auburn together,” he said. “In fact, we won Battle of the Bands at Auburn.”

“That was under Mr. Jerry Padgett,” he said.

Hudson said they also opened up for David Ball one year at the Kiwanis Center.

They also played in the FFA String Band in high school.

“We won the state championship,” he said.

The group had an album they released years ago.

“I don’t even know if we have any of those around anymore,” he said.

Hudson said they are going to play a lot of 1990s country.

“We’re going to play stuff like Garth Brooks, Alan Jackson, Keith Whitley, Brooks and Dunn,” he said. “We may do a pop song or two.”

Hudson said they are excited to be back on stage and to participate in July Jamz.

“We are going to do a more acoustic thing,” he said.

A foam cannon will begin around 7 p.m.

There will be vendors set up with food and drinks.

Bring your lawn chairs and blankets.

The event will culminate with a fireworks show.

Mouth art on display at LAAC

Chelsea Rae Huggins is living proof that you can’t keep a good woman down. Huggins, who was seriously injured in... read more