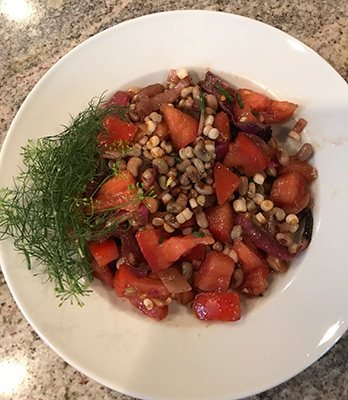 Try this spin on succotash this weekend

Succotash is a simple dish of corn and beans. But history has it that it was probably served at the first Thanksgiving instead of the buttery potatoes or the apple pie.

In the winter it was dried beans instead of fresh plus a little meat or fish.

Succotash was a nourishing Native American staple, a thick stew that could feed a crowd.

It is also a lot of fun to say

Today nearly all succotash recipes maintain the marriage of corn and beans, but the original tough field corn and native shell beans (typically cranberry beans in New England) have largely been replaced by sweet corn and lima beans. In its many adaptations, corned beef, salt pork, potatoes, tomatoes, okra, and peppers have all made their way into the succotash pot, along with butter, fresh herbs, and sometimes even a splash of cream.

In my August 2017 issue of ‘The Local Palate’ Frank Stitt and Timothy Hontzas did two very different recipes of succotash. Of course I did my favorite chef, Frank Stitt’s recipe.

He used fresh field peas and fresh herbs to use his summer bounty. It is a great way to use all those summer vegetables.

2 ears corn, shucked, boiled for 4 minutes, and kernels cut off the cob

3 tablespoons olive oil, plus more for drizzling if desired

Prepare a hot grill o preheat broiler. Grill or broil onion slices, turning once, until lightly charred on both sides, about 3 to 4 minutes per side. Let cool, then cut into ¼-inch dice.

Stir in sherry vinegar and season with salt and pepper. Stir in olive oil, taste, and adjust seasoning as needed.

Opportunities for high school students to get ahead in their careers are endless in Covington County. Alabama Aviation College’s Michael... read more