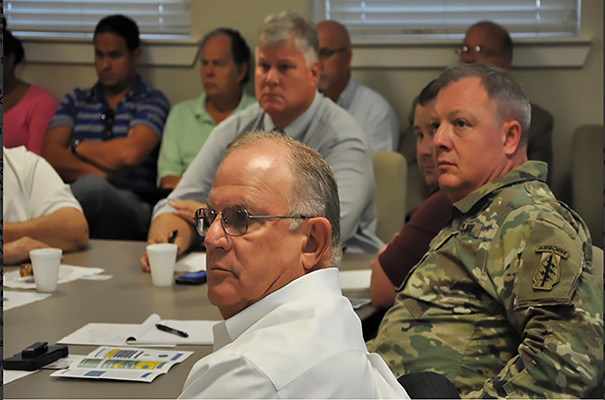 Andalusia Mayor Earl Johnson said he first met with National Guard officials about a year ago and committed that Andalusia would give the Army National Guard the property needed to do the project.

“They were seeking a proposal from us and from Opelika,” Johnson said. “To start with, we’ll put the property up. It’s property we already own in the industrial park. Under federal and state law, you have to give them the property. They need about 40 acres, and we’ve got a plot that works nicely.”

Johnson said the Army National Guard will spend approximately $13 billion over the next 10 years on projects similar to this one.

“In some places, they partner with law enforcement or fire departments for training facilities,” Clifton said.

Johnson said preliminary talks have been about the opportunity to partner with the National Guard for an educational facility.

“We have a serious workforce training issue in this state,” Johnson said. “If we could put something together that could be used for that, it would benefit the whole area.”
Clifton said another example would be building a pool that would double as a community facility and a PT training facility for the guard.

“They only use the facility 39 days of the year,” Clifton said. “Their only training is on the weekend.”

The National Guard’s portion of the proposed facility is expected to be 51,000 square feet, Clifton said.

“It is a massive project.”

“We’re trying to get plans in place for the future,” said Col. Philip Clayton, construction and facilities management officer with the Alabama Army National Guard, in a press release. “We want Andalusia to be “an enduring location of the Alabama National Guard.”

If the National Guard and the City of Andalusia enter a partnership, the existing facility on Prestwood Bridge Road will be donated to the city, the mayor said.

Eric Gerritson, economic development specialist for the Alabama National Guard, said the Guard has partnered with the Alabama Law Enforcement Agency (ALEA) to build training facilities in Selma and Troy.

The Alabama Army National Guard’s Construction and Facility Management Office is holding several planning and programming document charrettes throughout the state in the month of August, including Greenville.

One important benefit of having a National Guard facility in an area is increased higher education funds for residents, Clayton and Gerritson both highlighted. Soldiers and Airmen in the Alabama National Guard are eligible to receive thousands of dollars of semester toward a degree or certification as soon as they complete basic training under the new enhanced Alabama National Guard Education Assistance Program, recently passed by the Alabama Legislature and signed into law by Gov. Kay Ivey.

The Covington County Sheriff’s Department and the Drug Task Force is in the midst of pulling up a large field... read more