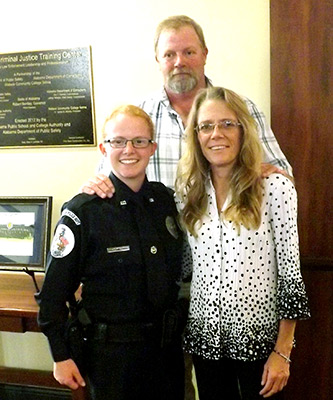 New Florala Police Officer Beth Johnson is the epitome of, “if at first you don’t succeed, try again.”

“Growing up I always had a passion for law enforcement,” she said. “I also wanted to work in a team atmosphere where I can help people and be a role model to kids.”

Johnson’s road to becoming a police officer wasn’t an easy one.

After being hired on, Johnson was sent to Selma Police Academy, where she was sent home in the first week after failing a PT test.

“When I got home I didn’t let it get me down. Instead, I made it motivate me to train harder. A few months later I went back to prove I belonged there.”

She then passed all of her mandatories and became a squad leader and vice president of class 159.

After a long 13 weeks, she graduated and received the leadership award from the academy staff.

She thanked the law enforcement officers, her family and friends, and Chief Sonny Bedsole and Assistant Chief Jessica McGraw for the opportunity.

A Jacksonville teenager and former Andalusia resident will travel to Orlando today to audition for American Idol, hoping it will... read more