Alabama has the third highest adult obesity rate in the nation, according to The State of Obesity: Better Policies for a Healthier America released this week.

Thirty-four percent of women suffer from obesity, and 31.7 percent of men have a weight problem. 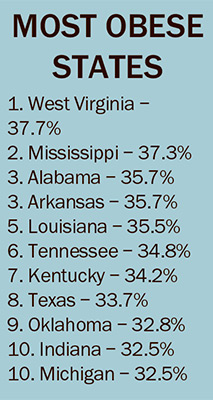 The high obesity rates correlate with higher rates of obesity-related diseases. In Alabama, the adult diabetes rate is 14.5 percent. There were 448,912 cases of diabetes in 2010, and at the current rate of obesity, that is expected to increase to 661,673 by 2030.

There is an even greater problem with hypertension, with 40.4 percent of adult Alabamians being diagnosed. That represents more than 1 million people, and the number is projected to increase to 1.2 million by 2030.

This year, the study also highlights policy actions Alabama is taking to prevent and reduce obesity, including required participation in physical education, access to recreational facilities, and sidewalks.

Three years ago, Ashley Sasser went to a dance exercise class, stood on the back row, and “I was always... read more