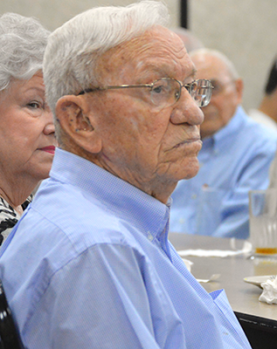 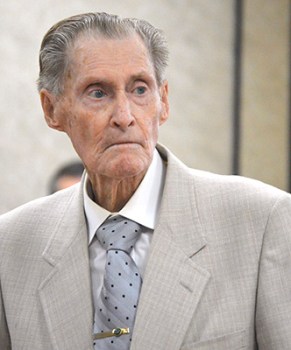 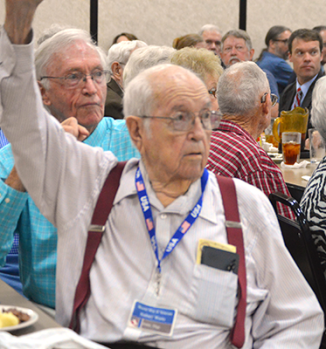 Alabamians have always made their mark in the military. That’s part of the message delivered at the Andalusia Lions Club by Air Force Reserve Col. Ben Bowden on Wednesday.

Bowden, who is also a Covington County circuit judge, was the guest speaker at a special Veterans Day program assembled by long-time Lion and Navy veteran John Vick.

Bowden spoke a little about World War I.

“Here we are 100 years removed from the ‘war to end all wars,’” he said. “It was certainly terrible enough to discourage future wars. In one battle – the Battle of the Somme – 1.2 million men were lost. The Allies only gained 7.8 miles of territory as a result of the initiative. Just to give you an idea of how far that is, it is 6.4 miles from here to Sanford.”

Bowden said it should come at no surprise that Alabamians played a significant role in the battles of World War I.

“We are a patriotic kind of people, and if there is a war to be fought, you can bet Alabamians will be trying their best to get in to it,” he said. “Many of the soldiers from Alabama who fought in World War I were from the 167th Regiment, which became part of the famous 42nd Division, commonly referred to as the Rainbow Division.”

Bowden said it was called the Rainbow Division because it was made up of a cross section of units from all across the United States.

“The 167th was commanded by Col. William P. Screws of Montgomery,” Bowden said. “They arrived in France in November of 1917. Apparently, the Alabamians were a rambunctious group with a reputation for bravery. While in training near the Mexican border, the district commander, BG Plummer reportedly said, ‘In time of war, send me all the Alabamians you can get but in time of peace for Lord’s sake, send them to someone else.’”

Those Alabamians played a huge part in the Battle of Croix Rouge Farm.

“The 167th Alabama assisted by the left flank of the 168th Iowa had stormed and captured the Croix Rouge Farm in a manner which for its gallantry I do not believe has been surpassed in military history,” Gen. Douglas MacArthur said.

“On Aug. 28, 2017, exactly 100 years after the Alabama troops departed from Montgomery, Ala., to go fight in France, officials in Montgomery dedicated a bronze statue in their honor,” Bowden said. “Of the 3,677 that departed for the war, 616 were killed in action and more than 1,000 were wounded. The statue, donated by the Croix Rouge Memorial Foundation, is the second casting of the same design. The other stands in France on the site of the Battle of Croix Rouge Farm, where the Alabamians, along with other American guardsmen, earned their reputation in the defense of freedom.”

Bowden said he is proud of the rich heritage he shares with other Alabamians who have served this great country.

“And I know you are, too,” he said. “To all of you veterans here today, thank you for your service. We owe you so much.”

“Misguided Southern pride kept me from being much of an Abraham Lincoln fan growing up,” he said. “Lately, I have come to appreciate him more and more for his common-sense leadership and his love of country.”

Bowden described Lincoln’s remarks at Gettysburg as “a much more eloquent statement of our responsibility to veterans.”