But it also was a growing church that needed more space. 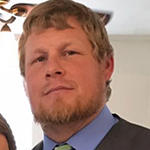 “We are full,” Pastor Tyler Ingram said. “We have Sunday School classes meeting in the sanctuary and in the fellowship hall. We had to move the walls to the Sunday School rooms to make room for people to get in the church. We expanded that in 2015.

“We don’t have anywhere to go, parking wise, and we have people parking in the ditches,” he said. “But they’re parking there because God’s doing something there, and it’s real.”

Ingram grew up in Buck Creek Baptist, but stopped attending for a period of his life. His congregation is a mixture of long-time members who he believed would be sentimental about the location, and new members who would be more open to move.

“We were working on a deal this summer to get some land to park on, but the deal fell through,” Ingram said. “This summer, I was praying very hard. I was fasting. I felt very, very strongly about what I was doing.

“On about the seventh day, there was a person in our church I stopped by to visit,” he said.

The congregant had lost his wife earlier in the year.

“He told me he wanted to donate land to the church,” Ingram said.

Ingram had long held the belief that the church would have to move to grow.

“I remember telling God, ‘They are gonna run me outta here on a rail, son.’ I thought back on people in the Bible like Moses. God sent him to lead those people. Moses said, ‘God, they’re not gonna listen to me.’ I’m an example, God uses imperfect people to get stuff done.

“There is excitement, I would say, in the church, from the old to the young. I have older people calling me, and they were so excited. The resistance never came.”

Count Charlene Griffin among those who are thrilled. Her grandfather, the late Rev. D.S. “Dock” Stephens, is a former pastor of Buck Creek.

“He pastored many churches in Covington County during his 50-plus years as a pastor,” Griffin said. “He literally laid the bricks for the building we are currently at in Red Level around 1946.

“One of the current members, Brother Winston Foshee, even helped carry supplies to and from him. Brother Wint was a young boy then.”

The original church is believed to have been across the road, and built in about 1904.

The Griffins had attended another church prior to spending a year in Tennessee in 2013. When they returned to Red Level, they learned that their high school classmate, Ingram, had begun preaching.

“After knowing Tyler in high school and seeing the genuine change in his heart and ability to share the Word of God, we absolutely wanted to be members at Buck Creek,” Griffin said. “It’s so hard to find pastors who preach the unapologetic and truthful Word of God yet with an humble and honest spirit like Brother Tyler does. He’s a pastor who understands a sinner’s struggles because he has been there and he just wants to love people and show them there is a better way with Jesus.”

Aside from the donation of seven acres of land about a mile from the current location of the church, there have been other contributions.

He was quick to point out that the church has not officially voted to build on the property, put plans are being drawn up. Griffin said there also is a dialogue with Carpenters for Christ about the possibility of them helping build the church.

At one time, Griffin said, the congregation at Buck Creek had dwindled.

“The church now averages about 175 people on Sunday mornings,” she said.

Ingram said the official membership is more than 200, and there were actually 200 people in the Easter worship service.

Ingram said some of the new members come from other churches, but most are unchurched when they arrive.

“I love those people,” Ingram said. “I grew up in the church, but at the same time, there are so many church people who are not saved people. So people get a bad view of people in the church. Saved or not, we’re people. We’re human. We sin.

“But with the prayers of this church, they’ve endured,” he said. “This summer was hard. I literally thought we were at the edge of the Red Sea, with nowhere to go. It’s like in life, when you get to a point where we think, ‘OK, there’s nowhere to go.’

“God is always working, even when we can’t see He’s working,” Ingram said. “My heart is overjoyed to know that even when I can’t see good thing, I know it’s coming.

“I’m thankful first of all that God made the provision for this church to continue to grow,” he said. “This is God’s plan, and we need every bit of it. He has blessed what we do here.”