Council may seek grant for sidewalks, new entrance to AHS 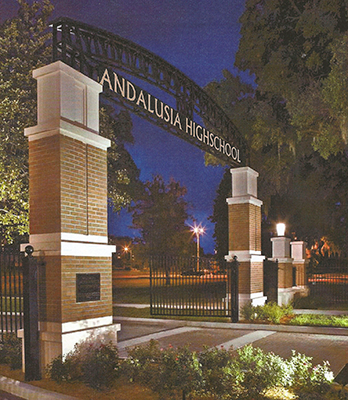 The Andalusia City Council is considering applying for a grant that would enable the city to put in a mile of sidewalks around the campus of Andalusia High School and Andalusia Junior High School.

Troy Hudson and Gabby Sanders of Southern Engineering Solutions showed preliminary drawings to the council Tuesday night. They are proposing presenting their plan with an application for a Transportation Alternative Program (TAP) grant.

“You already have an active project on Lindsey Bridge Road, from a couple of funding cycles ago,” Hudson said. “The difference we noticed this time in the grant is the maximum grant allowed is $640,000. It’s an 80/20 match, so you could do an $800,000 project.”

Hudson said the council only needs to give the nod for pursuing the grant now, and it could be as late as 2020 before the city would actually spend any funds on the project.

Sanders said the project is designed with six-foot wide sidewalks around the perimeter of the campus, including Third Street, 1st Avenue, Henderson Strret and 4th Avenue. The estimated length is just over a mile.

The project would also widen Coleman Avenue to Henderson Street, adding brick sidewalks on either side, and create a main entrance to the campus from the bypass.

Lampposts similar to those downtown also are included in the project.

“That entrance has a real negative, kind of a downer look right now,” he said. “The project we’ve got going to redo stadium will move all of that bus stuff out of there and clean up that area.

“That will give us an opportunity to put an entrance into the campus off the bypass,” he said. “That’s the way most people come and go now, particularly for sporting events.”

Johnson said the entrance would “make a statement about our school and our city.”

The council is expected to consider the grant application at its next meeting. There is no guarantee the city would receive the funding if it applied.