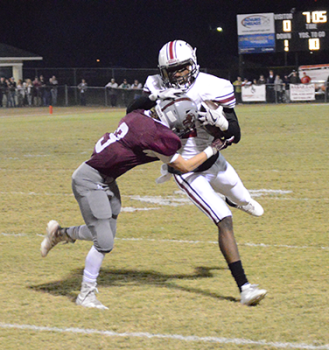 BJ Anderson cuts up field after making a catch.

Caleb Small comes up with a big interception.

Chip Morgan tries to bring an Eagle ball carrier down the backfield.

J.W. Jones makes a stop at the line of scrimmage. 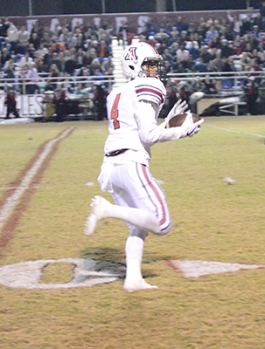 Sebaskin Stallworth hauls in a pass and races to the end zone just before halftime.

Roosevelt Weaver III makes a break for a hole. 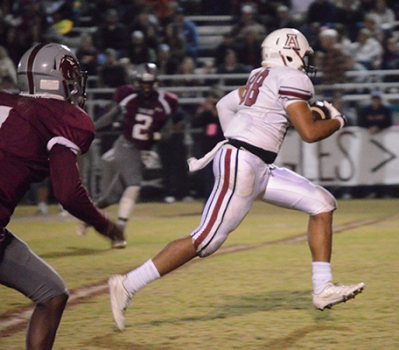 RJ Drish makes a catch in the middle of the field and takes it 35 yards to the end zone. 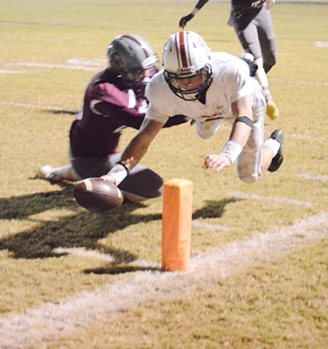 Ethan Wilson dives for the pylon and Bulldog touchdown. 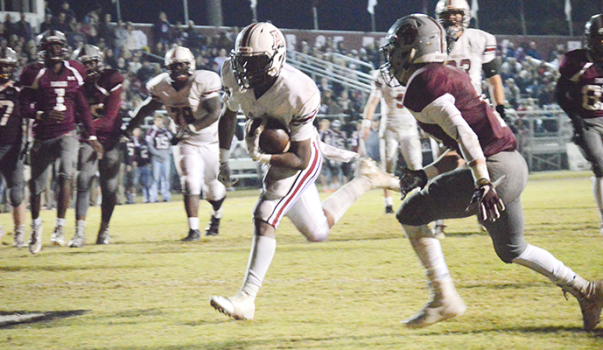 Josh Gurley rushes through the middle for a score.

Alabama Christian’s fans might have been confused about their opponent last night after ACA’s PA announcer introduced Andalusia as the Bulldogs from Anniston,

but the Bulldogs made sure the Eagles and their fans will never forget Andalusia, as they rolled to a 45-13 victory in Montgomery.

Looking ahead: Next week’s game

The Eagles got the ball to start the game, but Andalusia forced a punt after a short series.

Andalusia got things going with a big rush from Ethan Wilson on third down to give the Bulldogs a fresh set of downs.

The drive stalled around the Eagles’ 10-yard line, but Reese Burkhardt hit a 29-yard field goal to put Andalusia up 3-0 with 4:34 left in the opening quarter.

Alabama Christian fumbled on the first play of the ensuing possession, and Caleb Smallwood was there to scoop up the ball for Andalusia.

The Bulldogs looked to have a touchdown on a long pass from Wilson to Anderson, but a holding call brought the play back.

Andalusia attempted a fake punt a few plays later, but Wilson was drug down just before reaching the first down marker.

The Bulldog defense got a strong start on the next series with a big hit in the backfield from Gill Morgan and Matthew Lilly to help set up a three-and-out from the Eagles.

Andalusia got a long drive on the next series, but a couple of flags forced the Bulldogs to punt.

On the first play of the Eagles’ next series, Alabama Christian attempted a double pass, but the receiver was drilled as he tried to hurl the ball down field. The ball wobbled through the air where Smallwood snatched the ball for an interception.

Two plays after the turnover, Roosevelt Weaver scored from 13-yards out to give the Bulldogs a 9-0 lead with 6:43 left in the first half.

Alabama Christian used up a lot of clock on the next series, but was forced to punt the ball back to the Bulldogs with 1:33 left before halftime.

A few plays later, Wilson hit Sebaskin Stallworth for a 65-yard touchdown. Wilson found Grant Holley on the two-point conversion to give Andalusia a 17-0 lead at halftime.

The Bulldogs wasted little time opening up the third quarter when Wilson threw a dart over the middle to R.J. Drish, who then went 35 yards to the end zone.

A few series later, the Eagles drove down the field and looked like they could come away with a few points, but Undre Johnson made a diving interception in the end zone to end the threat.

The Bulldogs quickly marched down the field and Wilson finished off the drive with a 5-yard scamper to the end zone.

Alabama Christian then fumbled the ensuing kickoff to give Andalusia the ball back.

The Bulldogs got a couple of big runs from Josh Gurley before capping of the drive with 7-yard Gurley touchdown to put the Bulldogs up 38-0.

The Bulldogs began pulling starters and Alabama Christian was about to get a 30-yard touchdown on the Andalusia junior varsity defense.

Andalusia then got a rushing touchdown from Elijah McClain to put the Bulldogs up 45-7 with 33 seconds left on the clock.

The Eagles used a reverse on the kickoff return and went 75 yards to the end zone, but couldn’t add the two-point conversion.

“ACA had good game plan,” Andalusia head coach Trent Taylor said. “They wanted to stop the run and they did that in the first half. We were finally able to get some things going in the second half. Our defense has been playing really well. Give Coach (Adam) Helms and his staff credit. They have really done a great job.”