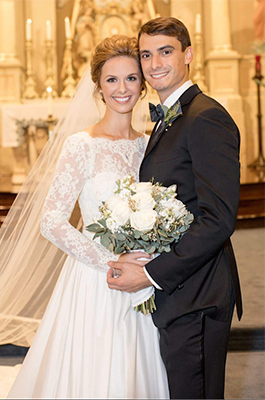 Miss Betty Marianne Wise and Mr. Clark Caffery Fletchinger, both of New Orleans, La., were united in the sacrament of holy matrimony, Friday evening, Oct. 6, 2017, at 7 o’clock in the evening, at St. Louis Cathedral in New Orleans.

Music for the nuptials was provided by Mr. Jesse Reeks, organist, and Mr. Jim Kilgus, uncle of the bride, trumpeter.

The bride was attractively attired in her mother’s wedding gown.

Following the ceremony, a traditional New Orleans brass band led the bride and groom, the wedding party, and the entire congregation through the French Quarter in a “second line” to the reception at The Jaxson.

The couple honeymooned in Greece and Italy and will reside in New Orleans.

The bride is a graduate of Bamberg-Ehrhardt High School, Clemson University, and earned her law degree from Louisiana State University School of Law. She is an attorney with Deutsch Kerrigan, LLP in New Orleans.

The groom attended Jesuit High School and Loyola University in New Orleans. He is the production manager of Plush Appeal and The Mardi Gras Spot in New Orleans.